Manchester City swept aside second-tier Cardiff City 2-0 with first-half goals from Kevin De Bruyne and Raheem Sterling to reach the FA Cup fifth round in their quest to win an unprecedented four trophies this season. 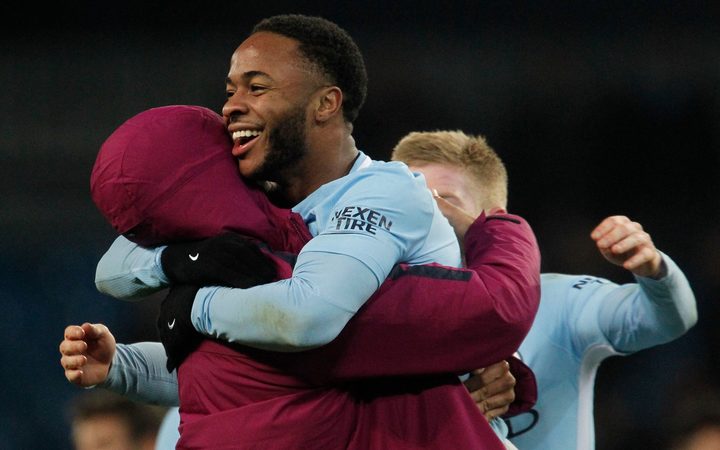 Pep Guardiola's side began without a recognised striker on Monday (NZ time) but took just eight minutes to go ahead when midfielder De Bruyne rolled a clever free kick under the wall as the defenders jumped to block the expected direction of his shot.

At Stamford Bridge, Michy Batshuayi took advantage of a rare start to score twice as Chelsea eased past Newcastle United 3-0.

"The wall was close so I thought it would be easier to hit it under rather than over," said De Bruyne.

Bernardo Silva thought he had netted a spectacular second goal for the visitors with a long-range shot but Leroy Sane was flagged offside, a controversial decision that led to heated discussions between Guardiola and the fourth official.

City's dominance was never in doubt though and Silva turned provider for the second goal, perfectly directing a cross for the unmarked Sterling to head the ball into the net after 37 minutes for his 19th goal of the season in all competitions.

Cardiff twice went close after the interval through Kenneth Zohore and Junior Hoilett but City always looked comfortable and Sterling and Silva spurned chances to extend the lead.

Danilo also drew an excellent save from home keeper Neil Etheridge before Championship side Cardiff's day got worse with the late dismissal of Joe Bennett for a second bookable offence.

His first clattering challenge on Sane led to the German's substitution at the interval.

"We knew how they played -- they caught us a few times and that is football," said De Bruyne.

Guardiola said the injury would be assessed on Tuesday.

Meanwhile, a pair of goals from Chelsea's reserve striker Batshuayi could not have been better timed with reports suggesting that Chelsea are close to signing a striker ahead of Thursday's transfer deadline.

The Belgian was one of four changes from the team knocked out of the League Cup in midweek and Antonio Conte's show of faith in his reserve striker was quickly rewarded when he got on the end of a slick move started by Pedro's probing pass to put Chelsea ahead on 31 minutes.

Although Batshuayi seldom gets game-time in the Premier League, he remains the Italian's go-to man in the FA Cup, with no Chelsea player having scored more in the competition under Conte.

Another strike quickly followed although this time Batshuayi needed a huge slice of luck when, set free by Eden Hazard, his shot was deflected over the keeper by the diving Jamaal Lascelles just before the break.

The goal was Batshuayi's 10th of the season.

Marcus Alonso added Chelsea's third just after the interval with a superb 72nd-minute freekick over the wall.

Defeat continued Newcastle's dismal record in the competition. The club last reached the fifth round in 2006.