Fast bowler Kagiso Rabada took three wickets as South Africa bowled India out for 187 to take the opening day honours on a seaming wicket in the third and final test at the Wanderers in Johannesburg. 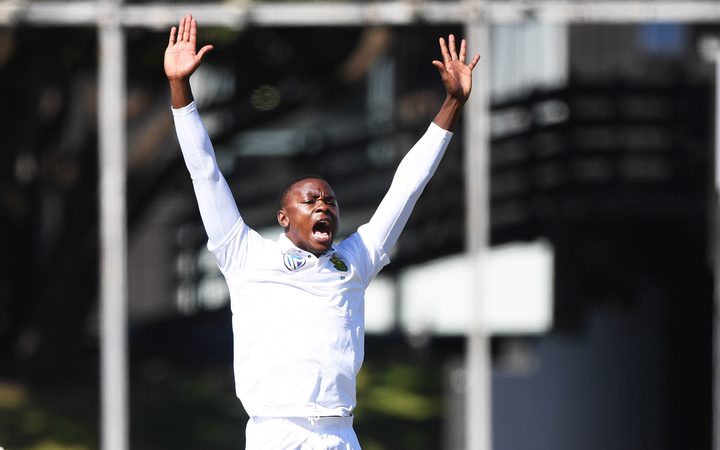 South Africa were six for one in reply at the close, with opener Dean Elgar (4) and nightwatchman Rabada (0) to resume as the hosts look to build a sizeable first innings lead on a difficult pitch.

Aiden Markram (2) was the only South African wicket to fall as he edged a delivery from Bhuvneshwar Kumar to wicketkeeper Parthiv Patel, with the pitch giving plenty of encouragement to both sides' all-seam attacks.

The hosts will be pleased with their day's work after India had won the toss and elected to bat, despite having dropped catches, eschewed what would have been a successful review and at times bowled too short and wide.

The key wicket was that of Virat Kohli (54), though he was twice dropped off relatively simple chances when on 11 and 34. He was finally removed when Lungi Ngidi (1-27) induced an edge to AB de Villiers at third slip.

De Villiers bruised the middle finger of his right hand in taking the catch and had to leave the field for treatment.

Cheteshwar Pujara (50) was the only other Indian batsman to post a half-century, with his patient innings taking 179 deliveries as he tried to stifle the home attack.

He had a slice of early luck when given not out after Ngidi struck him on the pads. South Africa did not review umpire Ian GouldG��s decision and replays showed the ball would have hit leg stump.

Pujara's vigil came to an end when he edged all-rounder Andile Phehlukwayo (2-25) to wicketkeeper Quinton de Kock, one of five dismissals for the gloveman.

Rabada (3-39) was perhaps the pick of the home bowlers, both fast and accurate. He removed opener Murali Vijay (8), caught by De Kock, before grabbing the wickets of Ishant Sharma (0) and the stubborn Kumar (30).

Morne Morkel (2-47) and Vernon Philander (2-31) also chipped in with wickets but were guilty at times of bowling with too much width, failing to make the batsmen play.

The home side had already claimed the series with an unassailable 2-0 lead but are chasing a first clean-sweep against India.