The New Zealand cricket team's perfect summer rolled on when they powered to a seven-wicket victory with 25 balls to spare in the first Twenty20 against Pakistan in Wellington on Monday. 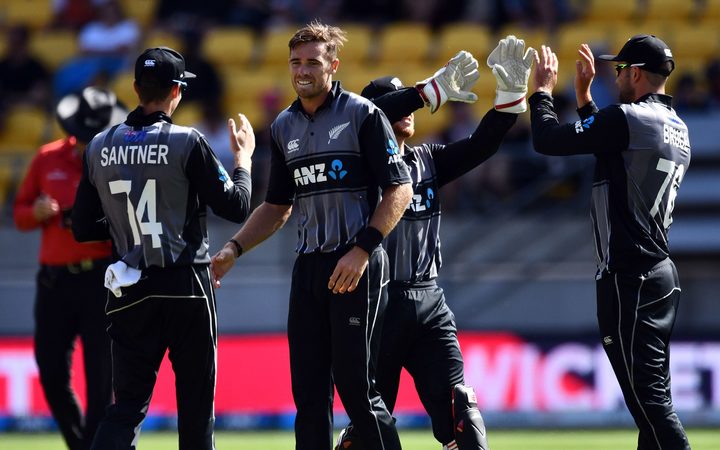 With 12 wins from 12 matches coming into the match, the Black Caps set themselves up for the convincing win with a clinical bowling and fielding performance.

Pakistan were all out for only 105 in the 20th and final over.

Despite the bouncy nature of the Westpac Stadium surface, it was always unlikely to be good enough against an in-form New Zealand batting line-up and the hosts cruised home on the back of another strong effort from Colin Munro.

The powerful left-handed opener hit an unbeaten 49 from 43 balls, with Tom Bruce hitting 26 off 22 and senior figure Ross Taylor helping close out victory with 22 from 13.

Game two in the series is in Auckland on Thursday.

Asked to bat on a challenging pitch, the tourists' top order succumbed to a series of wild shots.

Southee and Rance both benefited through good line and length in those early stages, while spin duo Santner and Ish Sodhi kept the hosts well in control as Pakistan were reduced to 53-7.

No other batsman reached double figures.

New Zealand lost opener Martin Guptill (2) and Glenn Phillips (3) with just eight runs on the board, but from there the home side achieved victory in relative comfort.

Munro put on 49 runs with Bruce, who hit three fours and a six, while Munro and Taylor's fourth-wicket stand was unbeaten and also reached 49.

Quiet early on before lifting the tempo as he found the pace of the pitch, Munro hit three fours and two sixes, with Taylor adding three fours.

Earlier, Southee came in as stand-in captain after Kane Williamson was ruled out of the match with a side-strain niggle.

Ranked No.1 in the world in the shortest form of the game, the Black Caps entered the series after winning the one-day international series against Pakistan 5-0.

Pakistan were bolstered by the return of pace bowlers Hasan Ali and Mohammad Amir, who both sat out the fifth ODI, but were without experienced allrounder Shoaib Malik, who flew home after suffering ongoing concussion symptoms.

He was struck on the head by the ball while batting in the fourth ODI.