New Zealand men's sevens coach Clark Laidlaw has named one debutant in his 13-strong squad for the first tournament of 2018, the HSBC in Sydney next weekend. 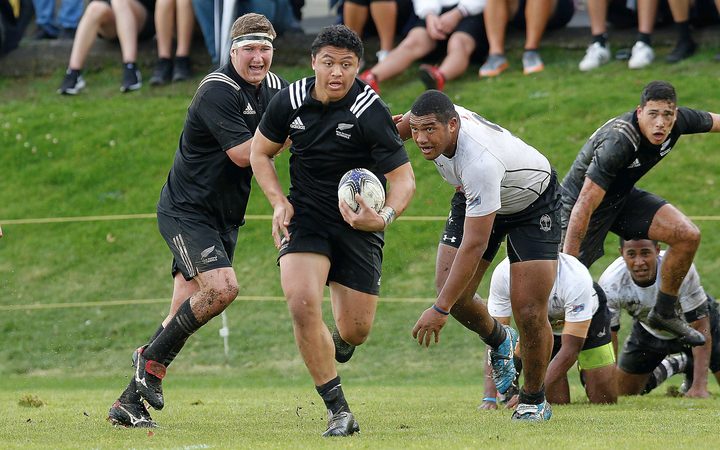 The son of former All Black Eroni Clarke, 18-year-old Caleb Clarke has earned selection, while Luke Masirewa returns to the national team after last appearing in 2013.

Laidlaw said the squad returned from the summer break in fantastic condition.

"We had 15 out of 17 players record personal bests in the fitness testing which seems ridiculous after a few weeks away.

"But the break was good because we'd had a lot happening since we centralised, so the players time away and they have returned really refreshed.

"It's an opportunity for these players and it is the start of us building depth in our squad. We are happy with the group of players we have got so giving them time out on the field is important."

Clarke joins the All Blacks Sevens environment from Super Rugby pre-season training with the Blues.

"We've worked closely with the Blues to have Caleb released to train with us and he is part of our plan to build depth heading into the Commonwealth Games," Laidlaw said.

"He's a big, powerful winger and we are really excited about unleashing him."

Masirewa joined the squad on Monday after an impressive National Sevens campaign with Bay of Plenty.

Laidlaw said it has been a long-term plan getting Masirewa back in the back jersey.

"We're excited about having Luke back in our environment, he's been working hard for the past year and has ticked all the boxes we have asked of him.

"He's a real point of difference; Luke is an aerial forward that can break the game open."

New Zealand, who sit atop the standings after finishing second in Dubai and winning the Cape Town leg, come up against Russia, Samoa and Fiji in pool-play in Sydney.

In the women's competition, New Zealand coach Allan Bunting has named an experienced team, with two changes from the team that finished fifth at Dubai in December.

Waikato players Shakira Baker and Terina Te Tamaki return to the playing squad, with the last appearance for both players being France last June.

They replace the injured Kat Whata-Simpkins and Kayla McAlister (overseas).

"The players we have selected are in great form," Bunting said.

"We are in a position that we have a great base of experienced players to pick from so the quality doesn't shift much when we select different players; they just bring something a little different."

"This time last year in Sydney we lost and we got some good learnings out of that as we did from Dubai in December.

"That failure has allowed us to grow in a few areas which were needed, I've seen improvements in our skill set and our mentality."

Buntind added that Sydney would double as valuable preparation for April's Commonwealth Games.

"The players always get a bit of stick from the Aussie crowd and that's all part of it, it's a good mental test for the team."