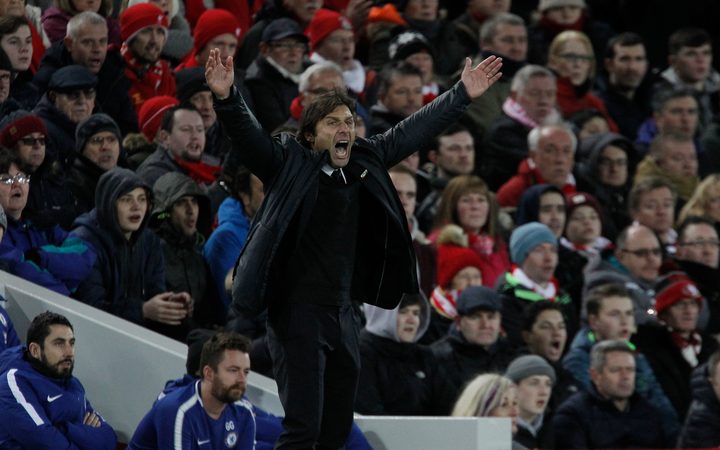 Antonio Conte's side had drawn 0-0 in two cup games before today's return to the league and were still unable to force a breakthrough after Leicester went down to 10 men when defender Ben Chilwell was booked twice in the second half.

But Leicester held on for the draw which leaves Chelsea on 47 points, the same as second-placed Manchester United, who play on Monday at home to struggling Stoke City.

Leaders Manchester City, who face Liverpool tomorrow, have a 15-point advantage over both clubs.

Irons captain Mark Noble broke the deadlock on 25 minutes but Joe Lolley levelled with an 18-yard effort before West Ham regained the lead just 11 seconds after the restart when Marko Arnautovic latched onto a flick by Cheikhou Kouyate.

Manuel Lanzini wrapped up the points with a well-crafted third goal on 58 minutes and swiftly added a fourth.

Jonny Evans and Craig Dawson netted in a 2-0 win over Brighton giving the second-bottom Baggies their first league win since August.

Newcastle United stretched their winless home run in the Premier League to seven games and continued to slide towards the relegation zone after a 1-1 draw with bottom team Swansea City.

Crystal Palace continued their rise up the table under former England manager Roy Hodgson by beating Burnley 1-0, Bakary Sako scoring the only goal of the game with an angled left-foot drive in the 21st minute.

The midfielder diverted the ball in with his arm a minute before full-time as Watford came from two goals down to snatch a 2-2 draw.

James Ward-Prowse had scored twice in the first half before Andre Gray pulled one back and Saints were crestfallen when Doucoure's equaliser was allowed to stand having stooped to nod into the net, although the ball missed his head and he swept it home with his arm.