The New Zealand under 19 men's cricketers have beaten defending champions the West Indies by eight wickets in their opening World Cup match at Mt Maunganui.

The Windies made 233 for 8 in their 50 overs with Matthew Fisher and Rachin Ravindra taking 3 wickets each. 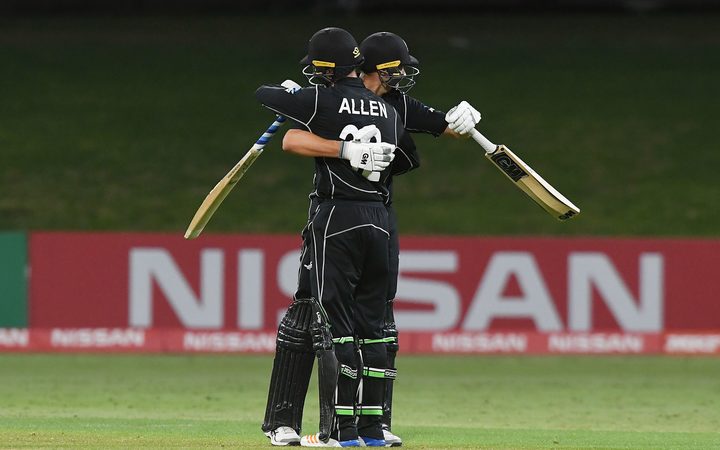 A brilliant partnership from Finn Allen and Jakob Bhula then helped New Zealand to their target with 10 overs to spare.

The pair put on 163 runs for the second wicket, while Allen became just the seventh New Zealander to score a century in the tournament's history.

Allen finished unbeaten on 115 off 100 balls, eclipsing his previous high score of 97 against Ireland at the last Under 19 World Cup in 2016, while Bhula fell on 83 with New Zealand requiring a further 24 runs for victory.

Captain Kaylum Boshier joined Allen for the final overs of the chase, but by then the job almost complete.

Allen and Bhula came together at the end of the 10th over after Rachin Ravindra was dismissed for 16 off the bowling of Ronaldo Alimohamed.

Bhula looked untroubled from the outset, particularly on the back-foot, while Allen showed a full array of strokes, with the sweep shot providing plenty of runs as New Zealand began to reduce the required run-rate.

It wasn't all easy going for New Zealand early on after Boshier won the toss and elected to field. West Indies put on 123 runs for the opening wicket, before Ravindra made the much needed breakthrough of Kimani Melius for 78.

The dismissal saw the runs dry up for the visitors, as New Zealand sensed an opportunity to make further inroads. Felix Murray replaced Ravindra, with the fellow left-arm spinner drawing the wicket of Bhaskar Yadram for 11.

Matthew Fisher returned with a bit of extra zip in his second spell and trapped Kirstan Kallicharan in front of his stumps for two, before Murray removed West Indies captain Emmanuel Stewart next over for just one run, leaving the Windies 150-4.

Fisher and Ravindra continued to be the go to men for New Zealand, with the pair picking up two further wickets each to limit the visitors to 233-8 from their 50 overs.

New Zealand take on Kenya in their second pool game on Wednesday in Christchurch.