Former Canberra Raiders player Kato Ottio has died from a "sudden health issue" just days before flying out for a chance to make his first-grade rugby league debut in England's Super League. 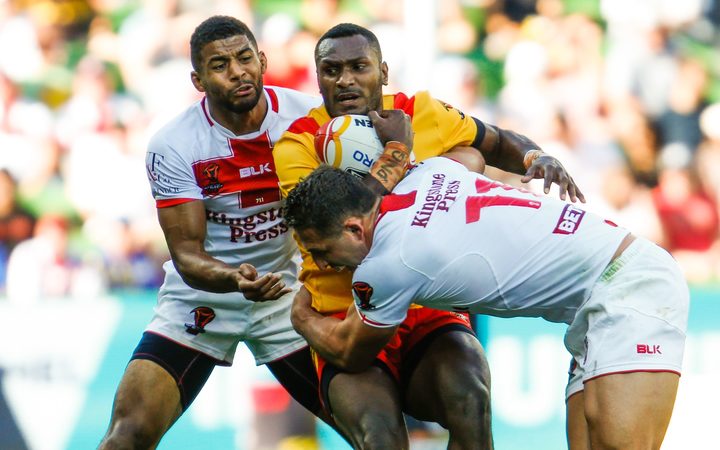 Papua New Guinea star David Mead has led the tributes for his 2017 World Cup teammate, who died aged 23 while training in PNG ahead of linking with the Widnes Vikings.

"Absolutely devastated to hear the passing of my Kumul brother Kato Ottio," Mead said on Twitter.

"He was one of most humble and kind hearted people I have ever known.

"Forever in my heart. Love you brother Rest In Peace. I will miss you."

It's believed outside back Ottio was training with players from Queensland Cup side PNG Hunters when he collapsed after a long running session.

He was taken to hospital but fell into a coma and never recovered.

Ottio never played an NRL game, but led the try scoring during the 2016 NSW Cup for Mounties and scored a try in last year's World Cup.

Stuart said his death had "knocked me for six" and described him as "a very respectful young man who appreciated" the club's efforts to support his career.

Austin said there "wasn't a day he wasn't smiling".

NSW Rugby League boss Dave Trodden also paid tribute to Ottio, who signed with Widnes in December after the World Cup and was to fly to the UK this week.

"Kato Ottio's passing, at just 23, is tragic," Trodden said in a statement.

"Kato lit up the stage in the Intrust Super Premiership NSW competition for Mounties in 2016 and had an incredibly bright future in our game as his caps for PNG in the World Cup showed.

"He will be sorely missed and our thoughts and wishes go out to his friends and family, not just in NSW but across the world."

"We are devastated to learn that Kato Ottio has passed away this afternoon. Kato was an incredibly talented player, with a bright future ahead of him in rugby league," Rule said.

"This news is all the more tragic, because Kato was due to travel to the UK this week to fulfil his dream of playing first-grade rugby league.

"Having only learned this morning that Kato had developed a sudden health issue whilst training yesterday, we are in absolute shock to now receive this tragic news."