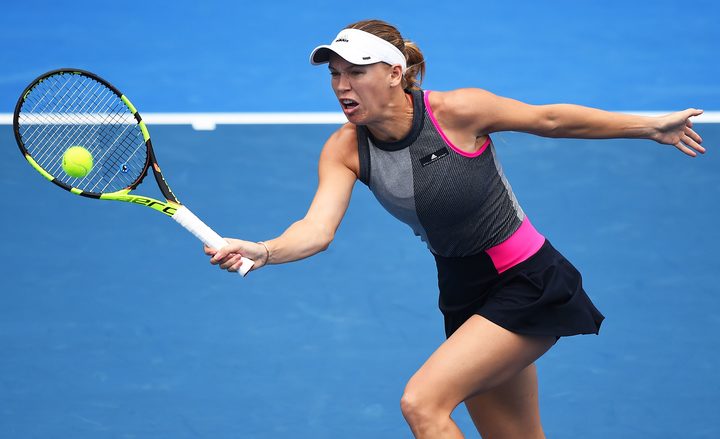 Fresh off Goerges' comprehensive semi-final win over Taiwanese player Su-Wei Hsieh, the Danish world No.3 proved simply too strong for her American foe.

She raced out to an early 5-1 first-set lead before holding off a spirited Vickery resistance to win 6-4, and then broke late in the second set to secure the match.

Wozniacki will play in her second Classic final, having lost to Venus Williams in 2015, while the German Goerges lost in the 2016 final to Sloane Stephens.

The Dane bagged four aces across the two sets and nailed 64 per cent of first serves, keeping the dynamic Vickery pinned back for most of the match.

"I really had to dig deep and stay focused, and she played really well, I have to say - picked it up and got a lot of balls back," the 27-year-old Wozniacki said.

Due to persistent rain in Auckland during Thursday and Friday, Wozniacki and Goerges were both forced to double-up their matches on Saturday.

The two players' respective victories set up the dream women's singles final for Classic organisers, with other big-hitters including Agnieszka Radwanska, Barbora Strycova, Sara Errani and Lauren Davis all failing to reach the final four.

Czech third seed Strycova had fallen out at the quarter-final stage to Hsieh, while fourth seed Radwanska was throttled by the energetic Vickery.

Wozniacki - gunning for both her first Classic title and a first grand slam crown at this month's Australian Open - said the schedule left her exhausted.

But she'd look to rev herself up for one final Auckland battle, and the prospect of facing down Goerges' lightning-quick service game.

"I felt a little tired going into the second match and then I played really well, started well, and I was like, this is going to be a good day at the office - and all of a sudden it's like, I'm starting to get a little more tired," Wozniacki said.

"It's going to be a tough match tomorrow but I'm just excited for the challenge and it's a great lead-up for me, I feel good about my game and my body."

Weather also forced Classic organisers to push the women's doubles competition indoors on Friday, with both semi-finals taking place inside.

In the doubles final, which will be held on Sunday, favourites Bibiane Schoofs and Errani will take on Japanese duo Eri Hozumi and Miyu Kato.