Opinion - The latest unseasonable rain has been disastrous for the ASB Classic women's tennis tournament in Auckland. In fact, it's gotten so bad that tournament director Karl Budge joked that he'd dance on a table if they get a full day's play. 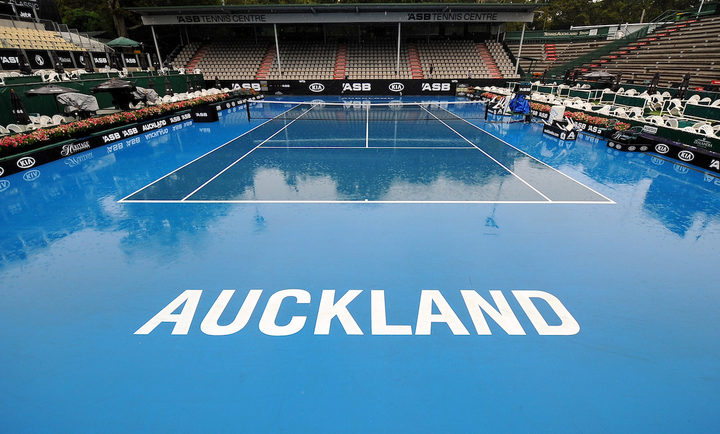 From the media box, the last few days have been spent watching the dark skies begin to drizzle, slowly driving even the most hardy tennis fans to abandon hope, leaving an empty centre court to turn into a swimming pool. And that's been on a daily basis.

Today's early match saw second seed Julia Goerges topple Polona Hercog in the early quarter final, which will be Goerges' first match of the day. The women are playing both their quarters and semis today (weather permitting), not the best way to go but the alternative is to abandon the whole tournament if the rain keeps coming.

The good news is that all four top seeds have made it through this far, so even with the disruption the chances of a big name final match-up are high.

The other event today was the announcing of the men's draw, which separated a very strong field. But, like Jade Lewis last week, NZ men's singles hopeful Michael Venus faces an uphill battle to make an impact beyond the first round.

The ASB Classic is a friendly, accessible gig for the media - and that was no different in the men's draw ceremony when Budge invited us all to help draw the chips to determine who played who in the first round.

Venus has drawn fifth seed Roberto Bautista-Agut, which at least will provide a decent centre court draw. The Spaniard enjoys a ranking spot 254 places higher than Venus, not quite the 800 or so that separated Lewis and Viktoria Kuzmova earlier in the week, but daunting enough in any event.

Even bigger is another crowd favourite American John Isner who, along with Steve Johnson, Ryan Harrison, Donald Young and Sam Querry, will round out a strong US presence.

As usual, Spaniard David Ferrer will be the sentimental favourite, with the seventh seed and four time champion admitting in the press conference that age was catching up with him.

Ferrer said that his slip down the rankings from top 10 resident to now number 37 was somewhat inevitable, but he still harboured a great desire to win a record fifth title in Auckland.

Once again though, his hopes of winning as well as everyone else's of simply watching tennis next week are at the mercy of this inclement weather. From the media box we can see a sliver of sky between the green backdrop of The Domain and overhanging roof - for seven days now it's largely been a threatening grey or merciless stream of rain.

It's meant that tennis fans, officials and players have all gone through the same spiral of annoyance, anger and then acceptance - the last one mostly due to the fact that the weather got so incredibly bad in Auckland that simply doing anything became difficult enough, let alone having a tennis match.