South Africa seamer Dale Steyn grabbed his first test wicket after an injury absence of 14 months as the hosts fought back against a fired-up India on an enthralling first day of cut-and-thrust cricket in the opening test at Newlands in Cape Town. 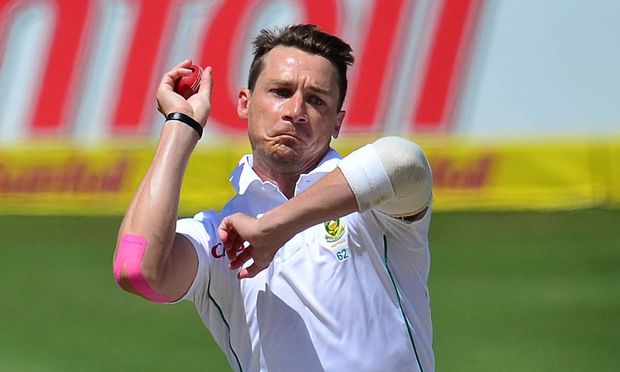 Steyn took his career tally to 418 wickets, three behind South African record-holder Shaun Pollock, as India were reduced to 28 for three at the close having bowled out the hosts for 286 on a spicy wicket offering bounce and some sideways movement.

Cheteshwar Pujara (five) and Rohit Sharma (zero) will resume on the second day as the tourists, who trail by 258, seek an answer to the venom in the pitch and the home seam attack.

Steyn, who had missed the last 15 tests with a career-threatening shoulder injury, caught and bowled dangerous opener Shikhar Dhawan for 16 with a quick bouncer that suggested he had lost none of his pace.

India also lost Murali Vijay for one, caught by Dean Elgar at gully off Vernon Philander, while Morne Morkel claimed the wicket of visiting captain Virat Kohli, who played at a rising delivery outside off-stump and was caught by wicketkeeper Quinton de Kock for five.

South Africa won the toss and elected to bat, knowing the Newlands wicket is usually at its quickest on day two, but were soon in trouble at 12 for three as India seamer Bhuvneshwar Kumar (4-87) tore through the top order.

Kumar took a wicket in each of his opening three overs as he snagged opener Dean Elgar with the third ball of the day and then had Aiden Markram and Hashim Amla dismissed cheaply in the next two overs.

The home side threw a counter punch with half centuries from AB de Villiers (65) and captain Faf du Plessis (62) as they put on 114 for the fourth wicket.

De Villiers reached his 50 off 55 deliveries before being bowled by debutant Jasprit Bumrah (1-73) after lunch, while Du Plessis flashed at a wide delivery, handing all-rounder Hardik Pandya (1-53) his first wicket of the three-match series.

South AfricaG's tail wagged to a degree as they put on 144 for the last five wickets, with De Kock (43) particularly fluent until he was Kumar's fourth victim, caught behind by wicketkeeper Wriddhiman Saha.

South Africa host India in three tests this month with the next two to be played in Pretoria and Johannesburg.