The New Zealand pace bowler Trent Boult has moved into the top five of cricket's one day world rankings following his strong performances in the Black Caps three nil series win over the West Indies.

Boult has moved up three spots to fourth. 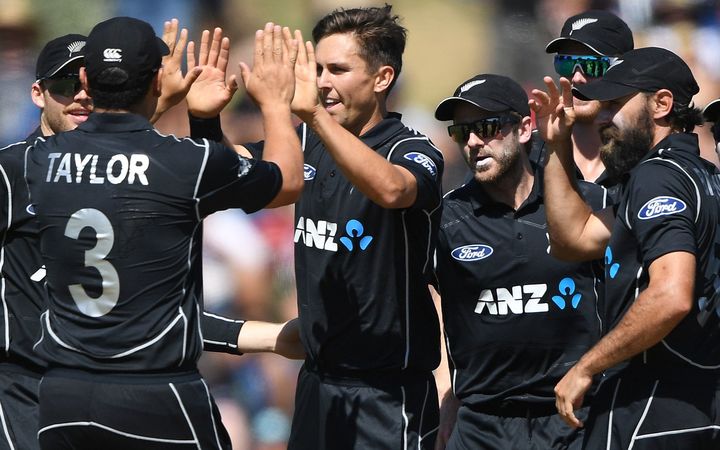 High five all round for Trent Boult who's moved up the ODI bowling rankings. Photo: Photosport

He's leapfrogged the Australia pair of Mitchell Starc and Josh Hazlewood as well as South Africa's Kagiso Rabada after finishing with 10 wickets in the series, which included a career-best haul of seven for 34 in the second match in Christchurch.

Boult had finished last year as the top-ranked bowler in ODIs, a place held by Pakistan pace bowler Hasan Ali in what is the last ODI ranking update for the year.

India captain Virat Kohli, who slipped in the T20I rankings for batsmen after missing the three-match home series against Sri Lanka, remains on top in ODIs.

Ross Taylor moves up four places to eleventh in the one day batting rankings, with skipper Kane Williamson the best placed New Zealander at tenth.

New Zealand remain fifth on the team rankings on a table led by South Africa while the Windies have lost one point and are still in ninth place.

The Windies have failed to secure a direct qualifying berth for the 2019 World Cup 2019 and will have to play in next year's qualifying tournament in Zimbabwe in March.

Afghanistan, Hong Kong, Ireland, Netherlands, Papua New Guinea, Scotland and host Zimbabwe are the other teams so far confirmed for the 10-team qualifier.