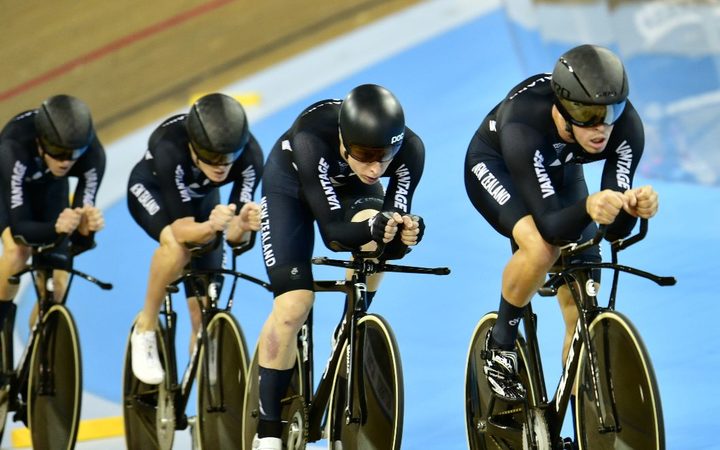 With an average age under 20 years, the quartet took out the gold medal in the final over hosts Canada.

The New Zealand team finished the event with six podium performances, including gold medals to the men's team sprint and the team pursuit.

The other medal winners on Monday were a silver to Ethan Mitchell in the individual sprint and third to Racquel Sheath and Michaela Drummond in the women's madison.

Natasha Hansen in the keirin and Campbell Stewart in the omnium had close fourth-place results.

But it was the men's pursuit foursome who headlined the final day of action.

Nick Kergozou, Jared Gray, Tom Sexton and Stewart, who came in to the final for debutant Harry Waine, found themselves one second down at the 2000m mark before the Canadians lost a rider who fell. New Zealand came home in 1:55 for the final 2000m to win by a second.

"It's unreal really because we have come here to focus on our processes and not time. We wanted to nail all three rides and execute to our plan and it came off, and got our best time as well which is a bonus," Kergozou said.

"Rather than racing against the opposition we just focussed on ourselves. Even in the final we focussed on riding to a schedule. We knew we had plenty in the tank and stayed relaxed even when Canada had a one second lead.

"From 2.5km we responded and finished strongly with all four riders, which was another goal.

"I am the old man of the team at 21. We are developing a great culture and starting to really click. There's a long way to go but we are moving in the right direction, and keen to follow this up with another good performance in Chile next week."

Mitchell, the world bronze medallist, displayed further evidence of his rising fortune to be third fastest in qualifying in 9.734s, just 5/100ths off his sea level best set last month in London.

He edged out sprint teammate Sam Webster in the second round before accounting for Great Britain's Philip Hindes in two straight rides in the quarterfinal and requiring a deciding ride to eliminate Canada's Hugo Barrette in the semifinal.

Mitchell pushed hard but could not match the power of top qualifier Jeffrey Hoogland of the Netherlands in two rides in the final, but continues to show the form to rise to the top echelon in the sprint.

The team, less the men's team sprint trio, head to Chile on Tuesday for the fourth round of the Track World Cup in Santiago this weekend.