New Zealand have gone 1-0 up in their two-test series against the West Indies with a dominant win in the first match in Wellington. 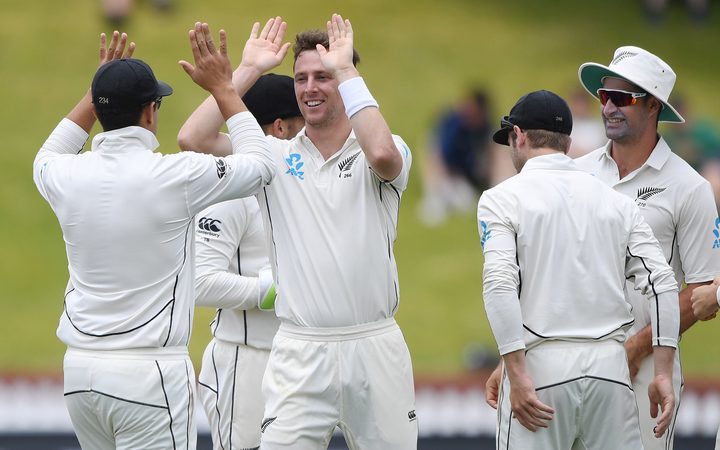 The Black Caps sealed an innings and 67 run victory with around a day and-a-half to spare at the Basin Reserve on Monday.

Needing to reach 386 to simply make the home team bat again, the tourists were all out for 319 in their second innings during the second session on the fourth and penultimate day of the match.

The West Indies had started the day 214-2, but lost three wickets in the morning session before the final five steadily fell within around half-an-hour of the resumption after lunch.

New Zealand seamer Neil Wagner was named man-of-the-match for his nine-wicket performance, which included a superb test-best 7-39 as the visitors crumbled to 134 all out in their first innings.

The Black Caps followed that dismal display by powering their way to 520-9 declared, leaving the West Indies almost 400 behind and in a position which ultimately led to their defeat.

Earlier on Monday, a double breakthrough from Matt Henry with the new ball kept New Zealand in firm command at lunch.

The Canterbury seamer took two of the three wickets to fall in the morning session, removing Shai Hope for 37 and Roston Chase for 18 to have the visitors 286-5 in their second innings.

Starting day four 214-2 and still 172 in arrears, the tourists made a steady resumption before spinner Mitchell Santner struck in the 12th over of the day.

The left-arm off-spinner trapped Kraigg Brathwaite lbw just nine runs shy of his seventh test ton, New Zealand successfully reviewing the not out decision as replays showed the ball had hit the opening batsman's pad before his bat.

The Black Caps did not hesitate to take the new ball when it was available two overs later and Henry soon capitalised.

The right-armer had Hope caught at gully by captain Kane Williamson in the 87th over, before Chase played onto his stumps just three overs later.

Sunil Ambris (18 not out) and Shane Dowrich (3 not out) survived the remaining seven overs until lunch.

Ambris, though, fell to Colin de Grandhomme form the first ball of the second session and when Dowrich followed two overs later, the writing was on the wall for the Windies.

De Grandhomme, Wagner and Trent Boult took a further wicket each to wrap up victory.

The second test begins in Hamilton on Saturday.