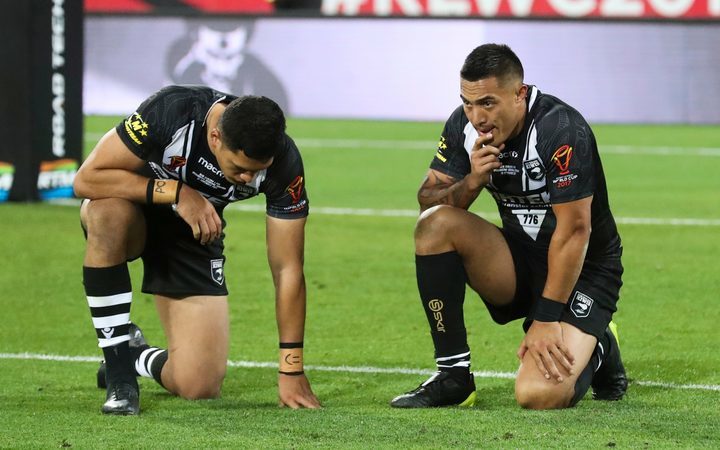 Down and out - the World Cup is over for the Kiwis. Photo: Photosport

They'll examine the performance of the players, coaches and team management.

They'll run the rule over the Kiwis' preparations and planning for RLWC17, resources committed to the campaign both human & financial, leadership and capability of all involved (including NZRL CEO Alex Hayton), the way coach David Kidwell came into the job and the NZRL coach selection policy, player selection policies, management of player culture and welfare, tournament logistics, game plans, implementation and evaluation.

"We were all disappointed with the Kiwis' performance and need to understand what went wrong," said NZRL chairman Reon Edwards.

"A thorough independent review is essential if we're to get it right for the next World Cup."

He said consideration of the current coaching eligibility rule, whereby the national coach must be a New Zealander would be but one of the matters reviewed by the panel.

"We recognise the sport at all levels is integral to many communities around the country, and we're approaching the task with a positive and constructive frame of mind.

"Raelene and I will be rigourous and independent with our review, our findings and our recommendations."

Edwards confirmed the independent panel's findings would be released in February / March along with the four-year Strategic Plan that the NZRL has been working on for the past eight months.

"The review will input into the NZRL's Strategic Plan, which is well evolved and has been focusing on the delivery of better outcomes for the game.

"The plan establishes our strategic direction - setting out significant steps to build on and improve the game in New Zealand, from a core focus at a grassroots level through to our high-performance programmes and the Kiwis."

While the plan is close to being finalised, Edwards said the NZRL Board has deliberately postponed its release until the conclusion of the panel's review.

"Spending another couple of months on the review will allow us to set the best plan possible for the next four years.

"We completely understand how the New Zealand League community, including players and coaches, feel about this World Cup performance by our Kiwis team.

"We all want our team to be successful and we need to ensure we do and have everything we need to achieve what we all desperately want - to be best in the world."

Sport NZ CEO Peter Miskimmin said: "Sport NZ welcomes the review and credits New Zealand Rugby League for the process they are undertaking and the calibre of experts it has assembled.

"The campaign was disappointing and it's important the team and sport rebound. We want the Kiwis to be winning, and through their success be inspiring young people to play the game and play it well.

"Tim and Raelene bring a wealth of expertise and give the review the best possible chance of achieving these outcomes."