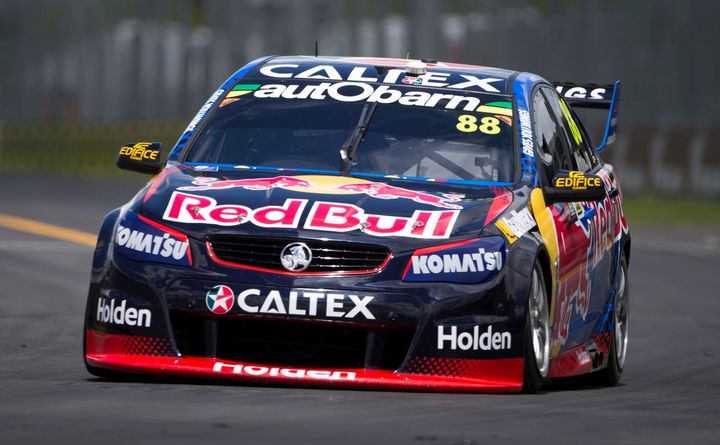 The Holden superstar celebrated just his fourth win of the season as McLaughlin squandered a 78-point series lead and pole position after three penalties during Sunday's 250km race.

McLaughlin kept on fighting and got into a title-winning position before he was hit with a third penalty for what appeared to be a telling pass with three laps remaining, with the 25-second penalty confirming Whincup's title, winning by 21 points.

McLaughlin's flying start from pole position wasn't a portent of things to come.

He was slapped with a penalty for speeding on his first entry to pit lane early in the race.

The 24-year-old Kiwi began weaving his way back into a desired position before an error drew a 15-second penalty on the 47th lap.

McLaughlin's Falcon made contact Simona de Silvestro's Altima, causing her to spin out of turn two.

After Taz Douglas ploughed into the wall on the 55th lap, a safety car brought McLaughlin back to the field bumping him up to 16th.

As McLaughlin embarked on another charge, Whincup's teammate Shane van Gisbergen allowed him to pass

Scott Pye let McLaughlin past on the 67th lap, putting him into 13th and edging him closer to the 11th placed-finish he needed to clinch the championship.

Three laps later, the safety car was on the track again but there was more chaos after the restart when McLaughlin's Falcon was damaged after contact from Pye, who bizarrely dived inside of car No.17, and retiring veteran Jason Bright.

McLaughlin rose from the ashes once more, but his third penalty proved fatal with stewards pinging him for what appeared to be a championship-winning pass of Whincup's Triple Eight Racing teammate Craig Lowndes.