World Cup referees boss Tony Archer has defended the decision to deny Andrew Fifita what would have been a game-winning try in Tonga's semi-final loss to England. 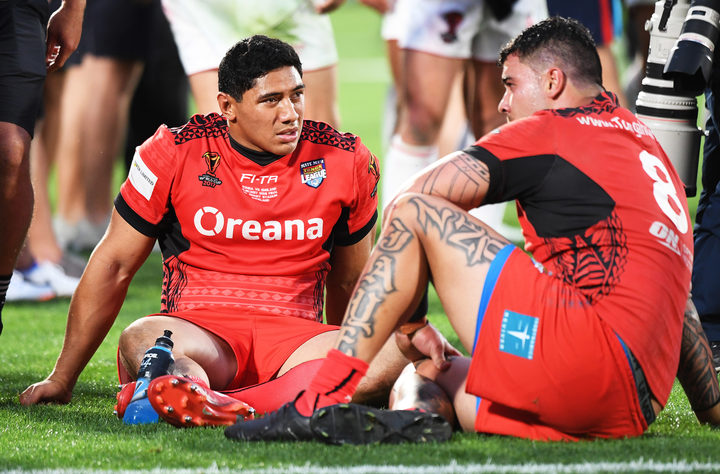 Jason Taumalolo and Andrew Fifita at the end of the narrow 20-18 loss to England. Photo: Photosport

The Tonga camp were left fuming when referee Matt Cecchin failed to refer the passage of play to the video referee during England's 20-18 victory on Saturday.

With seconds on the clock, Fifita lost control of the ball under the pressure of an Elliott Whitehead tackle before regaining it and rolling over the tryline.

Tonga coach Kristian Woolf was dumbfounded that the decision wasn't sent upstairs, however, Archer said the decision was correct and Cecchin was in contention to oversee next week's final.

"The decision is correct for me and that is he's affecting a tackle and there was no indicator he was stealing the ball," Archer said.

"It's a loose carry, knock on, the referee called it on field."

Archer said Whitehead's tackle didn't meet the criteria of a strip because he didn't attempt to steal the ball.

Whitehead's hand momentarily touched the ball, however, Archer said that didn't make it a strip and he was trying to bring Fifita to the ground.

"There needs to be a deliberate intention to steal the ball, he's affecting the tackle as his arm slides down the attacker's arm," Archer said.

Woolf was incensed that the decision was not sent upstairs to be examined, arguing it at lease warranted a review.

"I would've thought that, in those circumstances, there's no way in the world you don't look at it - that really surprises me," Woolf said.

Archer said the video referee would have come to the same conclusion and he had no problem with Cecchin making an on-field call.

"There's always the option to (go to the video referee) on a point-scoring play but we encourage the referees to make a decision on-field when they're in a position to see it," Archer said.

"Ultimately, if it had been referred up, the same result would have been the case.

"It would have been a no-try because the decision was correct."