Japan's first five Yu Tamura botched a chance to give the Brave Blossoms a famous victory over France when he missed a simple conversion late on in a 23-23 draw at the U Arena in Paris. 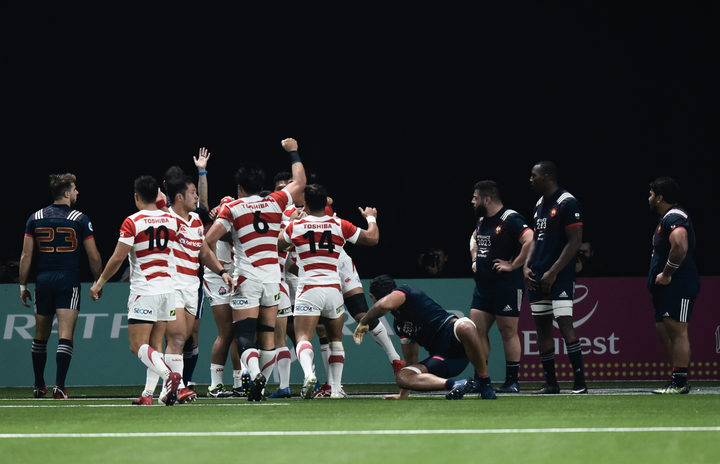 France have won just three of their 11 tests in 2017 and were fortunate not to suffer their most humbling reverse yet as Tamura lined up a 74th minute conversion with the scores level.

The kick was just to the left of the posts, one that Tamura would expect to make comfortably, but the miss allowed the home side to escape with a draw as they managed to survive more pressure from the visitors in the remaining minutes.

The result, though, was set to still intensify the unwelcome spotlight on coach Guy Noves two years out from the Rugby World Cup.

"It wasn't the result we wanted tonight, but all credit to Japan. Obviously we are very disappointed and this is a difficult time for us. We are struggling a bit with confidence," France fullback Scott Spedding told French television after the game.

Slimani gave his side a 13-8 halftime lead with a try just before the break, following two penalties from Trinh-Duc.

Japan had scored the first try through Horie midway through the opening period, dominating territory and possession as they tried to run the ball at every opportunity.

They went ahead shortly after the break when Lafaele crossed the line and Tamura added the conversion to stun the home crowd.

But a piece of magic from Trinh-Duc, who produced an excellent cross-field kick for Lacroix to run onto unopposed, swung the game France's way again.

Lacroix was sent to the sin-bin for a tackle in the air against Kotaro Matsushima but, down to 14, France retained their five-point lead as the teams traded penalties.

Japan drew level when Ishihara crossed from close-range, though there was a question over whether he was offside when he picked up the ball at the ruck, before Tamura's fateful miss.