The All Blacks survived ferocious Wales pressure to beat Warren Gatland's battling side 33-18 in Cardiff and complete an end-of-year tour clean sweep with a fifth tour victory. 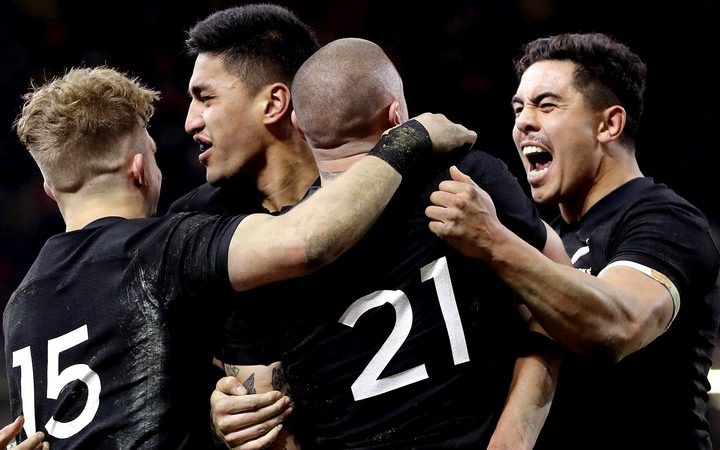 The match was closer than the scoreline suggested, with the All Blacks powered to a 30th successive victory over their opponents by their powerful wings Waisake Naholo and man of the match Rieko Ioane, who each scored two tries.

But they were given a mighty scare by the home side, who hinted at an upset just before the interval with a well-worked move that let in Scott Williams for a try in his 50th international.

A raucous home crowd sensed a possible first victory in 64 years over their illustrious opponents. There could and should have been more points as Wales, who enjoyed 63 percent of territory and possession, camped out on the All Black line for long periods, only to lack the killer punch.

Just as against Scotland the previous week, New Zealand struggled to get hold of the ball, although they were typically clinical when it eventually fell into their hands. Midfielder Anton Lienert-Brown, who replaced a concussed Ryan Crotty, also crossed after the interval.

Even then, Wales refused to buckle and halfback Gareth Davies, who had come on as an early replacement for the concussed Rhys Webb, sniped off the back of the scrum to cut the lead once more.

Home hopes proved short-lived however, with Ioane restoring the advantage to allow the All Blacks to end their rugby year on a tour high.

Ioane's performance was special considering he'd not long recovered from a bout of the mumps and a shoulder injury.

The win meant All Black coach Steve Hansen edged his Wales' and Lions counterpart Gatland 2-1 in a series of titanic clashes between their teams in 2017.

Hansen said winger Ioane could achieve whatever he wants "if we keep his feet on the floor" after the 20-year-old produced another standout performance in the win.

Ioane has swept all before him in 2017 and scored two tries in Cardiff just a week after a shoulder injury against Scotland looked to have ruled him out of the game and possibly put him out for several months.

But, after being compared by his coach to Lazarus for the way he recovered in time to face Wales, Ioane delivered another display of pace and power to spearhead New Zealand to victory in their final game of the year.

"If we can keep his feet on the floor, he can go anywhere, that kid," said Hansen, who has watched his rookie score 10 times in 11 tests since making his debut at the end of last year.

Ioane's performance was in keeping with his astonishing ascent this season and showed why he is one of three finalists for World Rugby's Breakthrough Player of the Year award, alongside Argentina's Emiliano Boffelli and France's Damian Penaud.

He's also a finalist for World Rugby's top award the Player of the Year.

"Every time he gets the ball, you wonder what is going to happen. He has got pace, but he is strong with it," said Hansen.

Every time either player got the ball they threatened, with Ioane capping his display by also setting up Naholo's first try.

Wales coach Warren Gatland admitted the pair made the difference between the teams, with Ioane providing a reminder of the devastating form he showed against the Lions earlier this year when he scored twice in the first test.

"He's pretty special," said Gatland. "Any team in the world would love to have a player of that quality."