Czech tennis player Jana Novotna, who won the 1998 Wimbledon championship after falling short in two previous finals, has died at the age of 49 after a long battle with cancer. 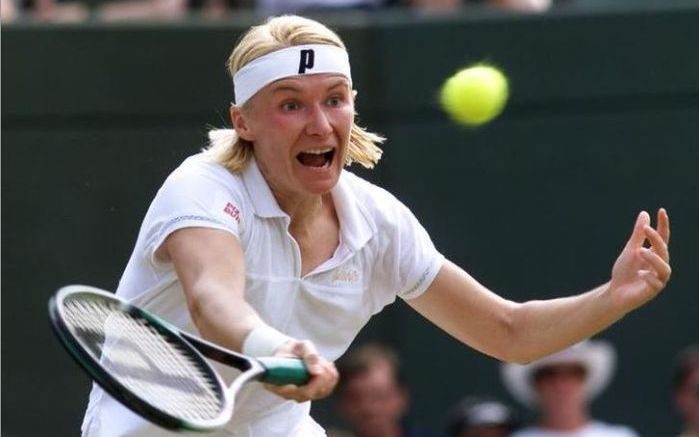 In a career spanning 14 years that included 24 WTA singles titles and 76 doubles titles, Novotna won her only singles grand slam at Wimbledon in 1998 after losing in the 1993 and 1997 finals.

She won the hearts of fans around the world when she burst into tears after throwing away victory against Steffi Graf in 1993. She was consoled afterwards by a British duchess, who predicted Novotna would one day hold the trophy.

The 16-time grand-slam doubles winner was one of the biggest names in the Czech Republic's tennis history.

"The tennis world is so sad about the passing of Jana Novotna," Czech tennis heroine Martina Navratilova said on Twitter. "I am gutted and beyond words -- Jana was a true friend and an amazing woman."

Navratilova battled cancer -- a breast tumour -- in 2010, with Novotna helping her go through treatment, an experience that made them friends.

Novotna entered the Tennis Hall of Fame in 2005 and stayed active in the sport, coaching players such as 2013 Wimbledon champion Marion Bartoli and fellow Czech Barbora Krejcikova.

"Jana was an inspiration both on and off court to anyone who had the opportunity to know her. Her star will always shine brightly in the history of the WTA," WTA Chief Executive Steve Simon said in a statement.

Former U.S. Open finalist Pam Shriver said on Twitter: "Jana was as kind as she was athletic, as smart as she was competitive. I canG��t believe she is gone this soon. Her smile lives forever young."

As a 24-year-old in that first Wimbledon final with German great Graf, Novotna was a point away from taking a 5-1 lead in the third set only to serve a double fault.

Four years later she fell again to a teenage Martina Hingis in the final but came back a year later to beat Frenchwoman Nathalie Tauziat in straight sets.

Novotna reached world number two in singles and was a number one doubles player multiple times. She won three Olympic medals -- a singles bronze in 1996 and two silvers in doubles in 1988 and 1996.

Several current Czech stars such as Petra Kvitova and Karolina Pliskova called her an inspiration on Monday. "We will miss her," the Czech Fed Cup team Facebook page said.

After ending her career in 1999, Novotna lived in Florida before returning to her hometown of Brno. She still played in senior matches and did television commentary.

In 2015, Novotna spoke to Czech newspaper Mlada Fronta Dnes of her love for the sport and said she could not go a day without tennis.

"It would be horrible," she said of that prospect.