The Silver Ferns' disappointing international netball season just got worse after going down by 16 goals to the Australian Diamonds in Sydney. 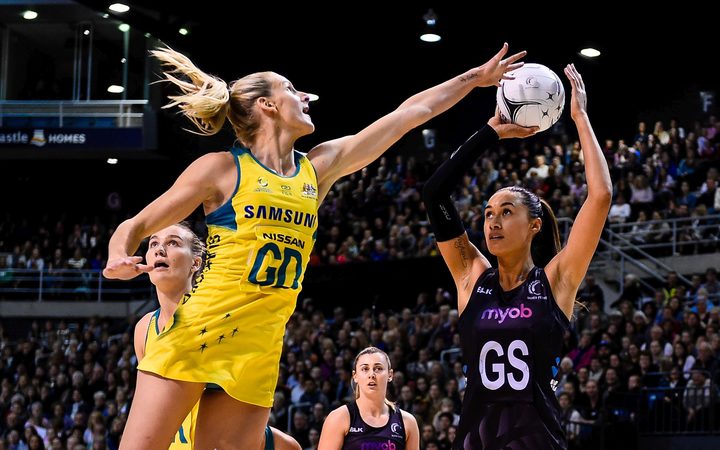 Maria Tutaia of the Silver Ferns shoots over April Brandley of the Diamonds during the Constellation Cup 2017. Photo: PHOTOSPORT

The 58-42 win gave the Diamonds a series whitewash for just the second time in the Constellation Cup history.

Star shooter Maria Tutaia, who's been guilty of committing too many turnovers during the series, was left out of the starting line-up.

The Ferns shot out to a 5-nil lead on the back of some spectacular defensive plays by Temalisi Fakahokotau.

It didn't take long though for the Diamonds to fire back, taking advantage of some sloppy mistakes from the Ferns' attack.

The Diamonds brought it back to 5-all and from that point it was basically goal for goal the rest of the quarter.

Selby-Rickit did a power of work, scoring all of New Zealand's goals after the first quarter.

For the first time in this series the Silver Ferns led after the first quarter 13-12.

Mes continued to struggle in the second spell and was replaced by Tutaia mid-way through after failing to score a single goal.

Tutaia made an immediate impact, putting up shots and controlling more of the play.

At the same time Caitlin Thwaites replaced Caitlin Bassett at goal shoot and was effective in opening up more space in the Diamonds' shooting circle.

The Silver Ferns continued to gift Australia possession after committing a number of held balls, footwork, and breaking offences.

The Diamonds took advantage to lead 26-22 at half-time.

In the second half, Gina Crampton came on at wing attack and Shannon Francois moved to centre, replacing Sam Sinclair.

The Silver Ferns were able to keep picking up ball on defence, but basic mistakes on attack continued to plague them.

The Diamonds pushed ahead further, leading 40-31 at three quarter time.

Janine Southby made a raft of changes for the final quarter, including the introduction of rookie goal shoot Maia Wilson for the last few minutes.

The Diamonds continued to flourish, led by a commanding performance by Thwaites.

The 16-goal loss is the biggest margin of the series and will give the Silver Ferns coaching staff plenty to think about as they build up to the Commonwealth Games next year.