Springbok coach Allister Coetzee is confident his side has laid to bed the ghosts of a 57-0 thrashing by New Zealand last month and are ready for another clash with the All Blacks at Newlands this weekend. 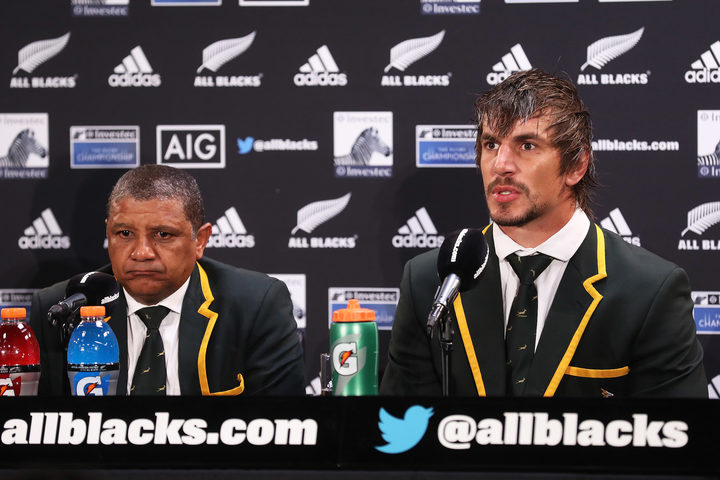 The humbling by the world champions was a record defeat for the Springboks, who drew 27-27 with Australia in Bloemfontein last weekend in their penultimate match in the Rugby Championship.

"That 57 is out of the system already," Coetzee said. "We've shown it by playing against a fantastic Wallabies side and being unlucky not to win.

"To come back from that loss in Albany (against New Zealand) and then being in a position to win it (against Australia) in the end has certainly turned the tables around," Coetzee added. Any chance South Africa might have of a win over the All Blacks, who have beaten the Boks in 14 of their past 16 meetings, will be determined by decision making at key moments.

"It's important to start well and it is key how your key players manage the game. We have to be good at set pieces and win the mini battles on the field," Coetzee said.

"You can't give the All Blacks the ball on a platter. They are a quality side."

Asked if there any lessons South Africa might take from the British and Irish Lions, who held the New Zealanders to a drawn series this year, Coetzee added: "The big difference with the Lions was how many more experienced players they had. They had a composure that I don't think you'll see in our side yet. It's still a young team and they will still learn."

Coetzee described playing the All Blacks as always a nice challenge.

"They are a well-oiled machine and what they do is always sharp and crisp," he said. "Their players ooze confidence. Our challenge is to improve. We must focus on the process and not so much on the outcome."

Saturday's match is the last for both countries in this year's Rugby Championship which New Zealand have already won.