England beat the West Indies by six runs on the Duckworth Lewis scoring method to take an unassailable 3-0 series lead after rain curtailed what promised to be a thrilling finish to the fourth one-day cricket international at The Oval. 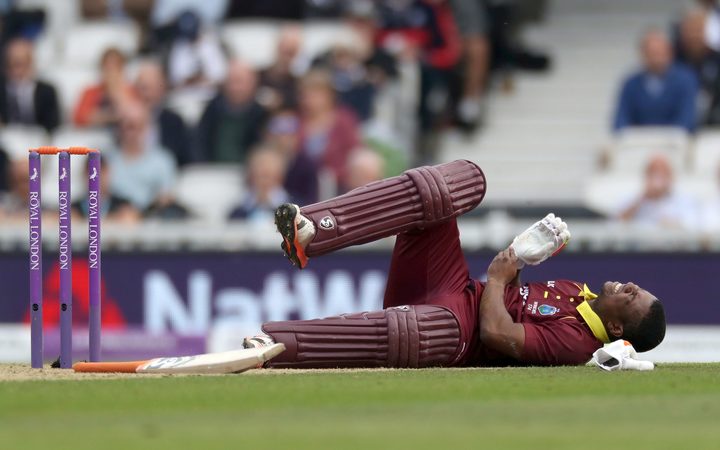 When the weather intervened in the 36th over, England had just scrambled ahead of schedule after a thrilling counter-attack from Moeen Ali (48 not out) and Jos Buttler (43 not out) took them to 258 for five in reply to West Indies' 356 for five.

England's sixth-wicket pair put on 77, timing their acceleration perfectly with the prospect of rain in the air.

The result was particularly cruel on the tourists' Evin Lewis who hit seven sixes in a brilliant innings of 176 not out from 130 balls.

Lewis's knock came to a bizarre end when he smashed a full Jake Ball delivery against his ankle off an inside edge in the 46th over and dropped to the ground in agony.

Lewis, who was diagnosed with a hairline fracture, was wheeled away on a stretcher to a standing ovation for an innings that surpassed the previous international record for a retired hurt of 165 set by Australian Charles Bannerman against England in 1877.

Jason Holder hit 77 and Jason Mohammed 46 as the visitors posted their highest score of the series.

England, without Ben Stokes and Alex Hales who were involved in a nightclub incident on Monday, got off to a fast start as they aimed for their highest successful ODI run chase.

Opener Jason Roy hit his first ODI half-century for 11 innings before edging Alzarri Joseph to the keeper for 84.

England temporarily fell behind the rate until Moeen, who hit a century in the last game, and Buttler took charge.

Joseph finished with figures of 5-56 from 8.1 overs after conceding 25 without taking a wicket from his first three. At the age of 20, he is the youngest West Indian to take five wickets in an ODI.

Lewis will be out for around three weeks and will miss Friday's final game of the series in Southampton.