The All Whites have climbed 10 places to be 113th and Oceania's top nation in the FIFA's latest world football rankings. 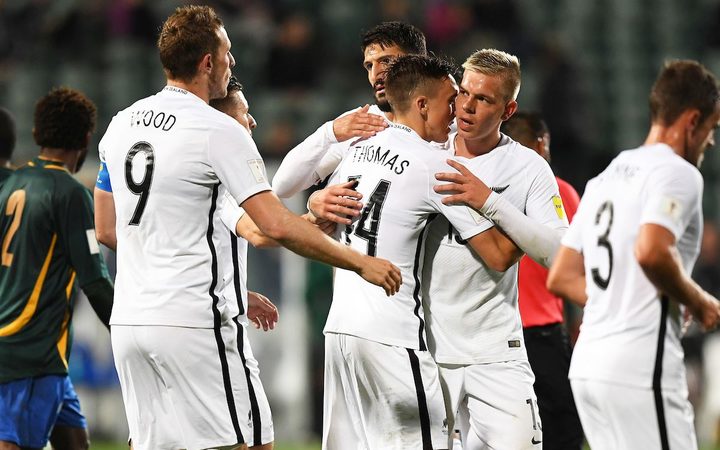 All Whites celebrate a goal in their FIFA qualifier against the Solomon Islands Photo: Photosport NZ

New Zealand, will play off against the fifth-best team in South America for a World Cup berth.

World champions Germany supplanted Brazil to return to the top of the pile.

Germany's 2-1 win away to the Czech Republic and their 6-0 drubbing of Norway in the World Cup qualifiers lifted them over the already-qualified Brazil, who dropped points in a draw away to Colombia.

European champions Portugal climbed three places to third, even though they are second in their World Cup qualifying group behind Switzerland.

Argentina are fourth in the rankings despite struggling in qualifying for Russia 2018 with draws in their past two games -- away to Uruguay and at home to Venezuela.

Three other teams reached their best-ever place -- Peru (12th), Northern Ireland (20th) and Luxemburg (101st) after they held France to a 0-0 draw away.

The rankings made disappointing reading for Asian nations with only three sides in the top 50 - Iran (25th), Japan (40th) and Australia (50th).

The best of the other regions are Mexico at No.14 and Egypt at No.30.

The next FIFA rankings will be announced on October 16 and will be used to determine the seedings in the draw for the four European playoff ties for next year's World Cup.