Melbourne are a game away from successive NRL grand finals after a thrilling 18-16 victory over a fearless Parramatta outfit at AAMI Park. 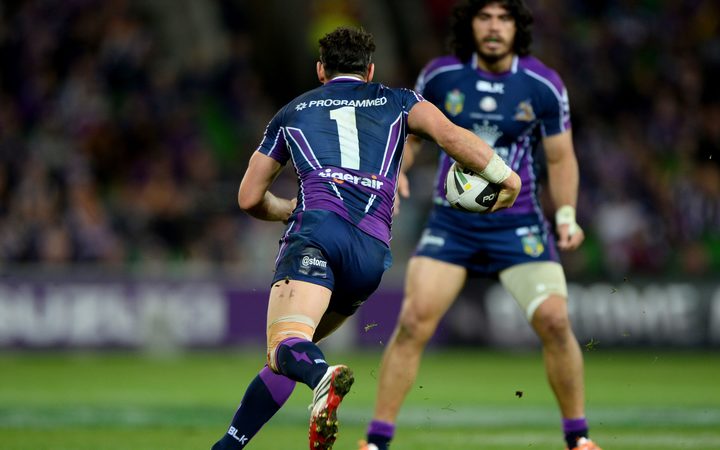 The minor premiers were expected to steamroll the Eels but the visitors almost put a major dampener on the Storm's preliminary-final plans and celebrations for skipper Cameron Smith's record 356th NRL match.

Melbourne enjoy a week off while Parramatta next weekend will play the winner of Sunday's elimination final between North Queensland and Cronulla.

Trailing 10-4 at halftime, the Storm put on two tries within four minutes early in Saturday's second half to snatch back the lead and regain momentum.

The first try was scored by Felise Kaufusi after the frantic Storm sent the ball through 13 pairs of hands on the final tackle.

Billy Slater then crossed for their second in the 50th minute after speedster Josh Addo-Carr kicked a ball through into the in-goal for the veteran fullback.

With those tries converted by Smith, Melbourne opened up a 16-10 lead.

After a successful Smith penalty for the Storm to go ahead 18-10, the Eels were then back in the fight when winger Semi Radradra scored in the 66th minute to set up a thrilling finale.

Melbourne were quick out of the blocks with Addo-Carr touching down in the fourth minute, after centre Curtis Scott was able to get the better of his opposite Michael Jennings.

But the home side lost their way with the sin-binning of Cameron Munster in the 17th minute for a professional foul after tackling Kenny Edwards from an offside position.

The Eels scored two tries while Melbourne were a man down to set up their six- point halftime lead.

They first caught the Storm short out wide with Kirisome Auva'a crossing untouched, while their second came in the 31st minute when halfback Mitchell Moses flicked a no-look pass for exciting young fullback Will Smith to run through a hole.

Parramatta had two players - Manu Ma'u and Daniel Alvaro - both put on report which could hinder their finals hopes.