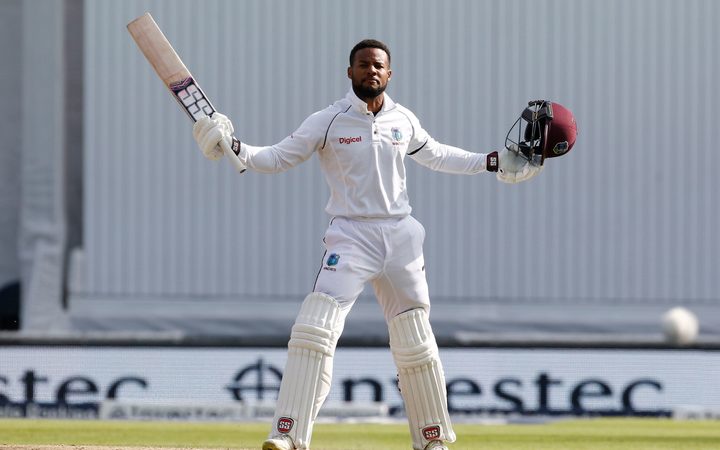 Batsman Shai Hope became a symbol of hope for the future of West Indian cricket after his landmark twin hundreds steered his team to victory in the second cricket Test.

The West Indies chased down 322 on the final day to level the three-match series at 1-1 after the world No.8 visitors were humbled by an innings and 209 runs in the first Test.

Their first-Test performance was widely condemned, with some suggesting a once- dominant team had hit rock bottom.

"After getting the kicking we did at Edgbaston, to get the boys back up to achieve what they've done these last five days, it's a great effort.

"It's put a lot of doubters out there to bed. It takes a lot of character to come out after the beating we got."

Law, who played one Test and 54 one-day internationals for Australia, took over the West Indies job in January before their 2-1 home Test series loss to Pakistan in April-May.

The win was the Windies' first in a Test in England for 17 years.

Hope was amazed to hear he had become the first man to score a ton in both innings of any match in 118 years of first-class cricket at the Leeds ground.

"Really? Thanks for the news," Hope said.

"Someone had to do it, so I just put my hand up and did it for the team," he said. "I'm just pleased to get the win."

"We're Test cricketers for a reason. We have the fight, belief and players to do it. I hope people back home will be happy," Hope told the BBC.

Hope said he trusted the win would be a stepping stone towards a brighter future for the team.

The 23-year-old was named man-of-the-match after his unbeaten match-winning 118 followed a maiden Test ton of 147 in the first innings as West Indies levelled the series at 1-1.

Along with Kraigg Brathwaite's fine batting - he added 95 to his first-innings century - and the reawakened spirit in the team, this was an emphatic answer to Windies greats like paceman Curtly Ambrose who had called their Edgbaston performance "pathetic".

"I said if he gets one (hundred), he'll get plenty - well he got one and he's got another," Law said of Hope.

"He's been going through the form dip but he's looked in good nick. Hopefully now the pretty 20s are gone and the pretty 120s are here to stay."

On Brathwaite, Law added: "He's not the most fashionable-looking cricketer but he gets the job done and he's one of my first picks every game.

"(He's got) plenty of courage, plenty of character and plenty of determination, and he played really well."

"It's credit to them for the way they came back after last week," he said.

"If we're being honest we weren't good enough first up with the bat and we need to make sure we learn those lessons at Lord's."