Floyd Mayweather admits Conor McGregor is a better boxer than he expected after claiming a 10th round technical knockout over the mixed martial arts champion.

McGregor, making his professional boxing debut, had boasted he would knock out the 40-year-old American early but his lack of ring savvy betrayed him as Mayweather improved to 50 win - no loss record to surpass heavyweight great Rocky Marciano's 49-0 record for most wins without a loss or draw.

Whether the megafight will be the richest of all-time, as promoters predicted, is still to be determined but Mayweather left no doubt of his place in the pantheon of boxing alltime greats in what he declared was his last fight. 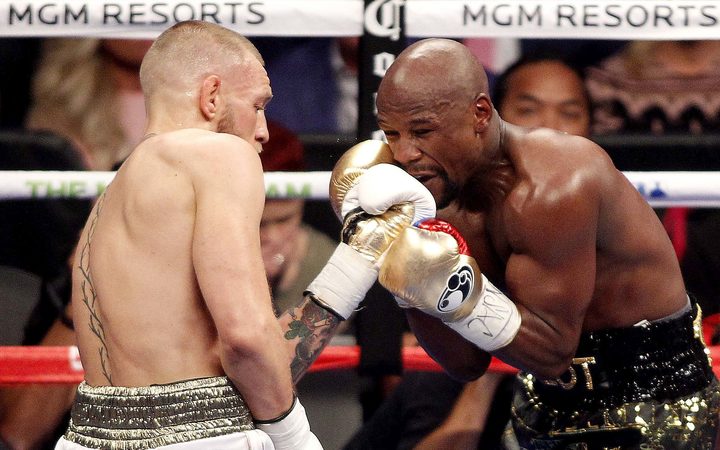 Conor McGregor and Floyd Mayweather slug it out in Las Vegas. Photo: Photosport

As promised, McGregor came out full of fury and menace but Mayweather, long regarded as the finest defensive fighter to step into the ring, left few openings and used the first three rounds to feel out his opponent.

By the fourth round Mayweather went on the attack and started landing blow after blow against a suddenly desperate McGregor who was bravely hanging on while clutching and grabbing the American.

In the 10th, Mayweather moved in for the kill pinning a visibly fatigued McGregor against the ropes and landing a flurry of punches when the referee stepped in to stop the fight.

"He is a lot better than I thought he was, he used different angles and was a tough competitor but I was the better man tonight," said Mayweather.

"Our game-plan was to take our time, let him shoot all his heavy shots early on and then take him down at the end, down the stretch.

"We know in the MMA he fights 25 minutes real hard and after that he starts to slow down.

"I guaranteed this fight wouldn't go the distance. A win is a win."

Having come out of retirement for his first fight in two years, Mayweather said there would be no encore.

McGregor will walk away with his reputation intact after putting up an accomplished showing in his first professional bout.

The 29-year-old believes the referee Robert Byrd called time on the fight too early.

"I took the early rounds fairly handy," McGregor said. "I thought it was close, I thought the stoppage was a bit early, there was a lot on the line and I thought he should have let me carry on.

"I was just a little fatigued. He is composed and you have got to give it to him.

"I thought it was close. I get a little wobbly when I'm tired, it is fatigue, the referee could have let it keep going, let the man put me down. I am clear headed.

"Where were the final two rounds? Let me wobble to the corner and make him put me down.

"I've been strangled on live TV and came back. When you're in here in the squared circle, everything is different."