Australian Daniel Ricciardo reminded Formula One's title contenders that a revived Red Bull can be a force to reckon with after lapping fastest in crash-interrupted practice at the Hungarian Grand Prix. 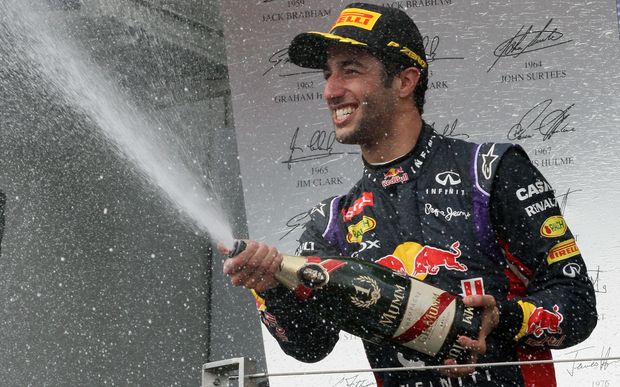 Fourth in the championship, and 60 points behind Ferrari's leader Sebastian Vettel at the mid-point in the season, the Perth-born driver recorded a best time of one minute 18.455 seconds in the afternoon.

Ricciardo also led the morning timesheets in 1:18.486, with both his fastest times comfortably inside the race lap record of 1:19.071 set by Michael Schumacher with Ferrari in 2004.

"We obviously brought some updates here and they seem to be working," said the Australian, winner in Hungary in 2014.

"I definitely feel like we have found some grip in various areas and taken a step in the right direction.

"Ferrari seemed to find a bit more pace in the afternoon but I still managed to stay ahead so all signs are good. IG��m sure the other teams will bring a bit more tomorrow, but I also think we have a bit more to find."

Vettel was second fastest, 0.183 off the pace, after a slow start to his weekend.

Mercedes' Lewis Hamilton, a point behind the German in the standings and chasing a record sixth Hungarian victory on Sunday, was third and fifth respectively in the two sessions.

"It's super tight between Ferrari, Red Bull and ourselves at the top of the leaderboard, so it's looking like it will be an exciting weekend," said Hamilton, who can take a record-equalling 68th career pole on Saturday.

"There's some more work to do overnight to fine-tune the balance to get the car just where we want it and I believe the pace is in there."

Ferrari's Kimi Raikkonen, second fastest in the morning, was fourth behind fellow-Finn Valtteri Bottas after lunch.

Vettel had been more than a second slower than Ricciardo in sixth place on a warm but cloudy morning at the Hungaroring outside Budapest.

"Struggling a lot with oversteer and rear tyres didn't seem to be ready," the German said over the team radio.

There were encouraging signs at struggling former champions McLaren, who had Fernando Alonso and Belgian team mate Stoffel Vandoorne in the top 10 in both sessions at the slowest permanent track on the calendar.

Renault's luckless Briton Jolyon Palmer, yet to score after 10 races, halted both sessions with costly errors that will have done little to boost the Briton's confidence or the patience of team bosses.

With Robert Kubica testing for Renault next week, amid speculation about what once seemed an impossible comeback after the Pole partially severed his forearm in 2011, Palmer needs to do something special.

Shattering his car's front wing on a kerb, leaving debris over the track and puncturing the right front tyre, and then crashing backwards into the barriers in the afternoon was certainly not it.

Ferrari reserve Antonio Giovinazzi, having a morning outing in the Haas in place of Denmark's Kevin Magnussen, brought the opening session to a halt when he hit the barriers.

Germany's Pascal Wehrlein also dumped his Sauber heavily into the barriers in the afternoon. He went to the circuit medical centre but was reported to be fine.