Three Rio Olympians have all gone under the World Championship qualifying mark on the first day of the New Zealand Open Swimming Championships in Auckland. 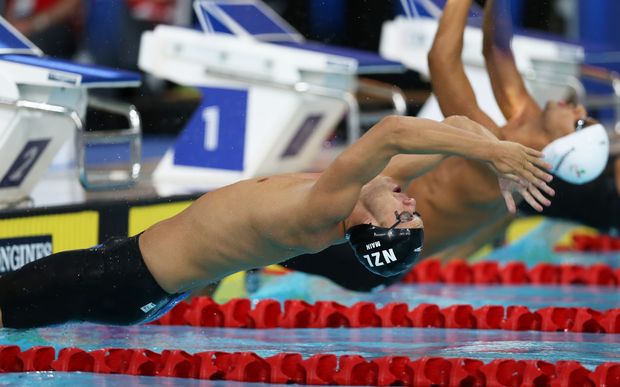 Helena Gasson, Corey Main and Emma Robinson are now all set to compete at the World Champs in Budapest in July.

Gasson set things going with a qualifying performance during the morning heats in the 50m butterfly.

Main, back from his base in Florida, nipped under the mark in winning the 200m backstroke while Robinson, who is currently based in Queensland, powered home impressively in the 800m freestyle.

Main was delighted with his swim.

"I was quite nervous before that race. It is quite challenging coming back from the US where we swim yards and convert to metres in a few days but it was a matter of getting the job done," Main said.

"I felt good in the morning swims and while I've not looked at my splits it felt good tonight and I am rapt to get the qualifying swim done on the first day."

Gasson, from Swimming New Zealand's high performance centre, qualified in the heats of the 50m butterfly.

The 22 year old from the Coast club surprised herself in the morning with her time of 26.45s, just 4/100ths of a second inside the time for Budapest.

"I'm targeting my longer events tomorrow and later in the week so it was great to get the qualifying mark in the 50 and that gives me confidence for the 100m butterfly tomorrow," Gasson said.

Robinson has usually set herself against New Zealand great Lauren Boyle, but with the fellow Olympian still recovering from injury, the freestyler had to do it on her own.

She was comfortably in control with 1:04 splits for each 100m to win in 8:34.66 which was nearly four seconds inside the qualifying time.

"It is always a bit difficult to know how you are going in an 800m so I will look at my splits but overall it felt like a good swim," Robinson said.

"It was tough to get back into things after Rio but I am really satisfied with that."

In Para-Swimming action, the great Sophie Pascoe qualified for the world championships and next year's commonwealth Games in the morning heats of the SB9 100m breaststroke, clocking 1:20.49.