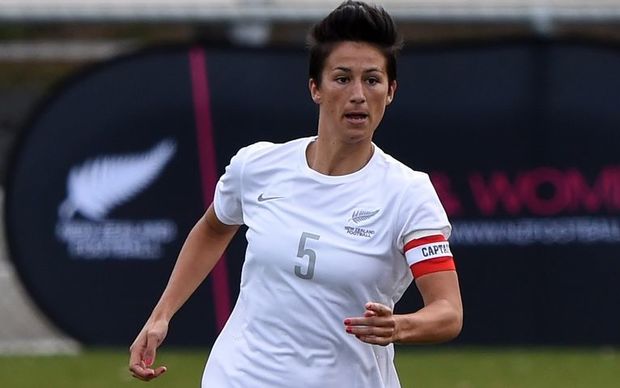 Erceg, 27, has played 130 games for the Football Ferns and her last campaign with the side will be at next month's Cyprus Cup.

New Zealand's most capped player said that while she was not physically ready to stop representing her country - mentally and emotionally she'd had enough.

Unlike in the US, where she plays professionally, the Football Ferns' players don't get valued by Football New Zealand, she said.

Erceg said players were expected to train during the day so struggle to get a job yet can't pay the bills on what they earn.

"I've shaped my life around this game and committed a lot to it and you get to a point in your career you can't justify the amount you're putting in for what you're getting back," she told Nine to Noon.

"In terms of going out and just finding a job and hoping it's going to cover everything, it's hard to do with all the trainings that we have to commit to. You're telling these people that I need to work but you've got to commit all this time to this . . . I don't know if I'm going to be here on this day, I can't actually tell you if I'm gonig to be here next week, I might have to leave for a couple of weeks to go on tour but I'm not sure yet."

Erceg said it's a stark contrast with her experience playing professionally overseas.

"All the salary I get is basically savings, all my housing is paid for, I've had cars paid for, all the facilitaies are paid for, we get sponsorship, all the gear is paid for, we get paid for appearances and to speak about about the sport. I literally just pay for food and that's about it, I can bring the rest back to New Zealand and be quite happy about it."

With around half of the Football Ferns playing professionally, Erceg believes a noticeable gap has emerged between the top players and the rest.

"We've now left half of the team here who haven't been as fortunate with those circumstances so the stresses of living have now had an impact on their perfromance as a player...we get this gap within the team, where the ability of the proffessonal palyers obviously can't be met with half the team who haven't been able train at that level."

She also said support has been hard to come by from New Zealand Football, despite the organisation's healthy finances.

"The thing I've heard the most is we have no money and we can't afford it, and that's really hard to accept as a player when your organisation for the past eight years have been in a surplus and they've announced a profit for the last eight years.

"We just want an environment where we are able focus on this job that we call football and we're able to do it without having to worry about if we pay the bills, if I'm going to be able to eat next week, if I'm going to get to these pinnacle events and be in a position where I can actually perform."

Due to the unfortunate and unfavourable circumstances within the organisation that is nzf, it is with regret and great sadness that today is the day that I announce my retirement from the international game. Without being able to justify my involvement any longer I will be stepping back in the hopes to create change for the current and future generations of nz footballers. I will continue to enjoy a professional career at a club level which I still find great joy in and I look forward to taking on that endeavour in the coming years. I have encountered many personal successes within the international environment and it is sad that this is what's required to adopt change. I say thank you to anyone involved in my international career no matter how big or small your role was, you have helped achieve the successes that I have been so fortunate to find. Time to move on to places where female footballers are appreciated, respected and endorsed. I hope that nzf one day has this philosophy.