Usman Khawaja hit his country's first century of the series and Peter Handscomb a half century on debut as Australia reached 307 for six with a lead of 48 at end of the second day of the day-night third test against South Africa in Adelaide. 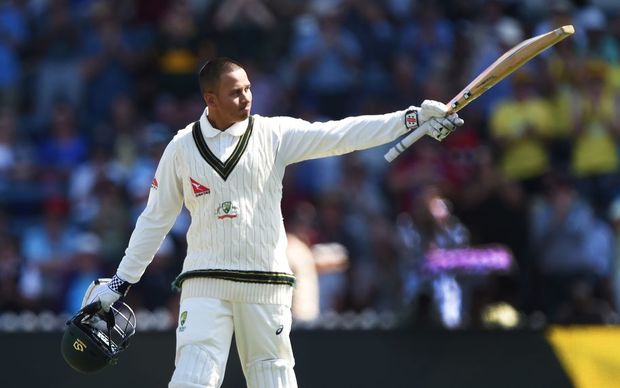 Khawaja's magnificent 285-ball 138 not out was the glue in Australia's innings, the left-hander putting on 137 with Steve Smith until his captain was calamitously run out and then 99 with Handscomb.

Kyle Abbott (3-38), who took two wickets in the first hour, returned to dismiss Handscomb before Kagiso Rabada bowled another debutant, Nic Maddinson, for a duck and Vernon Philander removed Matt Wade for four.

Khawaja will resume with Mitchell Starc (16 not out) on day three as the hosts look to extend their lead and put themselves in a commanding position to get the result they need to avoid a first ever 3-0 series sweep on home soil.

Now 29, Khawaja has been recalled and discarded with regularity since his debut in 2011 but was retained for Adelaide despite the clearout that followed the humiliating innings and 80-run defeat in Hobart.

After opening in place of David Warner in the wake of South Africa's declaration on 259-9 on Thursday, he negotiated a difficult opening hour on Friday before mixing fierce concentration with some typically elegant strokes.

He brought up his 50 with back-to-back fours and his fifth test century with a 10th boundary cut through point, whipping off his helmet to take the applause of another big crowd at Adelaide Oval.

Smith, dropped earlier by Hashim Amla, had departed for 59 just before his partner reached the milestone, tearing off for an optimistic single and left stranded as Khawaja stood his ground and Quinton de Kock removed the bails.

Handscomb, brought into the side on the back of a double century for Victoria, proved a more than able partner, however, and any prospect of another Australian batting collapse quickly dissipated.

The 25-year-old survived a scare when he just dived back into the crease ahead of a direct hit from Temba Bavuma but opened the following over with two drives and a pull for three fours that got him to his fifty and gave Australia the lead.

It was the outstanding Abbott who ended Handscomb's maiden test innings by bowling the Victorian through the gate an hour into the night session.

The 29-year-old, who came into the side in the second test for the injured Dale Steyn and took 6-77, started the day with a brilliant exhibition of disciplined seam bowling, finishing with figures of 2-7 and six maidens in his first 10-over spell.

Australia resumed on 14-0 but debutant Matt Renshaw was only able to add two runs to his overnight tally before he was brilliantly caught for 10 at third slip by Dean Elgar.

That brought to the crease Warner, who was unable to open as usual on Thursday after Proteas skipper Faf du Plessis's calculated declaration caught him off the field having treatment on his shoulder.

Warner failed to thrive at number three and was dismissed for 11 when he got an edge off an Abbott delivery that was seaming away from him with Elgar once again snaffling the catch in the cordon.