A 38-year-old British man has set out on a 3,200 km swim from Senegal to Brazil, seeking to become the first person to make it across the Atlantic Ocean.

Ben Hooper, a former military policeman who has been training for the challenge since 2013, expects to take between four and five months to swim to Natal in Brazil.

Wearing swimming shorts, he waved to well-wishers, saying "See you in Brazil" before wading into the water at Dakar's Monaco beach and starting a steady front crawl in the direction of Goree island.

A group of Senegalese onlookers said a prayer for him.

Hooper may have to swim through heavy seas, as well as shark breeding grounds close to Brazil.

"Together we're going to show that nothing is impossible," he said.

"I'm a little bit nervous, I'm a human being. I have a few fears hanging around, like I don't want to let my team down or my daughter, let alone my charities and my followers," he added. 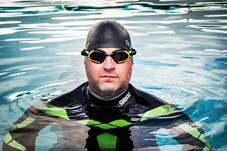 Hooper has had a lifelong passion for swimming since nearly drowning at the age of five. He said he first conceived of the Atlantic challenge while battling depression in later life.

In particularly risky zones, he will wear a camouflage wetsuit and use cans of rotting shark cartilage that are supposed to act as a natural repellent.

He aims to swim up to 12 hours a day in two sessions and then rest on board one of the two support vessels sailing alongside him with nine crew members and an English Mastiff named Tank.

The boats have been loaded with water, ration packs, bottles of vinegar for jellyfish stings - and a Christmas tree.

To ward off the inevitable fatigue and dips in morale, Hooper said he will think about his daughter but also bear in mind the exploits of explorers like Ranulph Fiennes, who crossed the Antarctic unsupported on foot, and is backing the mission.

"I will need to draw on their stories as this is bound to drive me to the edge," said Hooper.

Music also gives him a boost and one of his top training tracks is "Hall of Fame" by Irish band The Script.

The swim, which aims to raise a million pounds for charity, has been delayed several times. In recent days, three crew members including a skipper and medic dropped out before the planned start. They have since been replaced.

Sources formerly involved said that there had been concerns about the safety and readiness of the vessels.

"For me it was no skipper, no go," said John Rogers, a friend of Hooper's who was due to accompany him.

"But I hope Ben makes it. He has the stamina and the mindset even if he is a little crazy," he said.

Nigel Taylor-Schofield, captain of one of the vessels, said the tiller had broken on the eve of departure and had to be repaired overnight.

"It's going to be an interesting challenge," he said on the beach, with his catamaran bobbing in the background.

Besides rough seas, another challenge will be crossing the low-pressure area near the Equator known as the Doldrums, where boats can be becalmed for weeks.

French-born Benoit Lecomte claims to have swum the Atlantic in 1998 but it was not recognized by Guinness World Records and Hooper said his pace was impossible.

"If I don't make this, as long as I have at least one leg and one arm, I will bloody do it again and I will get it done," said Hooper.