Australia have made a calamitous start to the second Test against South Africa, crashing to 5-18 before they were skittled for 85 shortly after lunch on day one in Hobart. 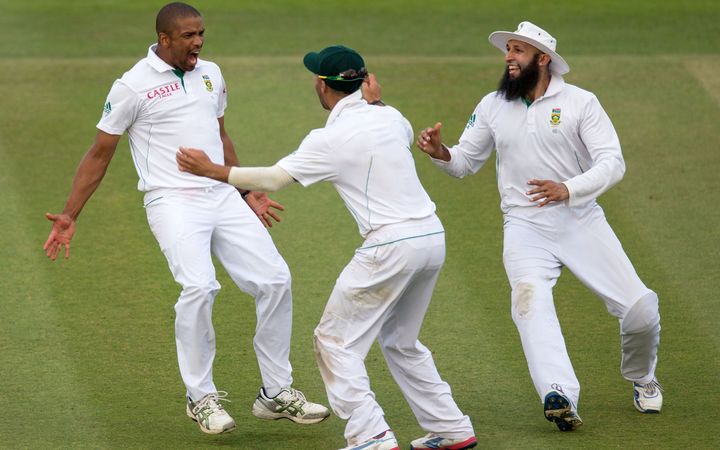 Australia unravelled spectacularly on Saturday after being sent in under overcast skies on a green-tinged deck, as was the case in Nottingham last year when they were bowled out for 60 in the Ashes decider.

Even that total looked like it would be beyond Steve Smith's side in an eventful morning at Bellerive, where Vernon Philander was on a hat-trick before being injured in a mid-pitch collision with Australia's skipper.

Philander returned to the attack after the meal break and finished with figures of 5-21 from 10.1 overs.

The chaotic collapse, which came five years after Australia were rolled for 47 by the same opposition in Cape Town, would have been so much worse if not for Smith, one of only two batsmen to reach double figures.

The captain's knock of 48 represented more than half of Australia's total and showed it was possible to score runs once a batsman was settled.

The determined right-hander also managed to take Philander out of the attack for most of the morning session, but not in a way he would have liked.

Philander, who claimed figures of 3-3 in a sensational opening spell featuring plenty of unplayable deliveries, trudged off with a shoulder injury after clashing with Smith.

Philander turned and appealed animatedly after a ball struck Smith's pads in the 13th over, while Smith took off for a quick single.

Philander grimaced, slumped to the ground shortly after the blow then was taken to the rooms where his shoulder was iced.

The right-armer returned to the attack after lunch, dismissing debutant Joe Mennie for 10

and Nathan Lyon for two to end the innings.

Vilas misfielded at point then found Ferguson, returning for a second run, short of his ground with a direct hit.

Ferguson's inclusion was one of three changes for Australia, who dropped Mitch Marsh in an effort to shore up their misfiring batting order.

Australia slipped to 6-31 when Peter Nevill was trapped lbw by Kagiso Rabada.