The Christchurch cyclist Michael Vink has taken the overall lead in the Tour of Southland after winning stage four. 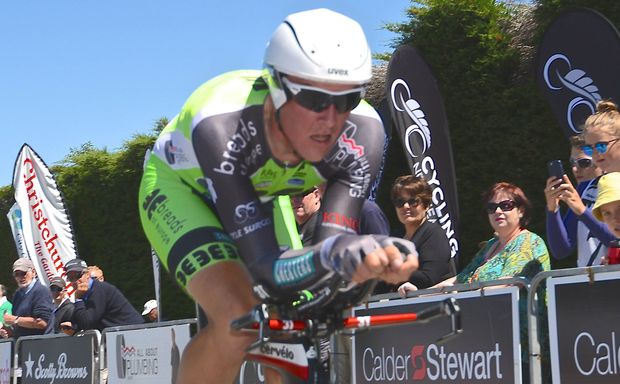 The peloton survived 40kmh winds, rain and the occasional bout of sunshine during a daunting 148.5km stage from Invercargill to a hilltop finish at Bluff.

Vink won the stage and now has a 2min 14sec lead over Michael Torckler, fellow New Zealander Hayden Roulston third at 2min 22sec heading into the final two days of the tour.

"(The weather) wasn't so bad for me, because it kept the group together and kept us rolling," Vink said.

"I knew (Hayden Roulston) was keen to get away, but that headwind forced everyone together, which was actually quite good for someone like me."

A new route for the Bluff Hill stage saw the peloton averaging 50kmh through the first part of the stage from Invercargill to Edendale and Wyndham.

However, as the race turned back towards Invercargill, a strong headwind and freezing showers were being thrown into the faces of the riders.

It was a 20-strong breakaway group full of prominent names which first set the pace, but then Vink, Roulston, Alex Frame, Aaron Gate and Dutch rider Sjoerd Kouwenhoven shuffled their way forward and took control of the stage.

The quintet took their charge all the way to Bluff before losing Frame to a puncture with 3km to go and then Vink jumped away midway up the Motu Pohue climb.

"It was a typical Bluff stage really, all action from the start," Vink said.

"It was a new circuit, so it was always going to be interesting to see how it would play out. I think everyone knew things were going to happen, and they sure did and I'm happy to profit from it."

"It was just the right mix - every team had someone there except for the yellow jersey so we all had something to ride for. From there is split and there was no letting off. I was lucky to have a team mate in Regan Gough, so he did a lot of work for me."

Victory at Bluff was a significant result for the multiple national under 23 road race champion.

"I've been third on this stage about six years ago, it was my first tour," Vink said.

"It's a stage which has always held something a bit special for me so to get a result is really cool and to take the yellow jersey is a bonus."

Vink said his Mike Greer Homes team would sit down and formulate a plan for the remainder of the tour.

The tour continues with a 151km stage from Invercargill to Gore tomorrow, followed by the individual time trial and final 77km stage on Saturday.