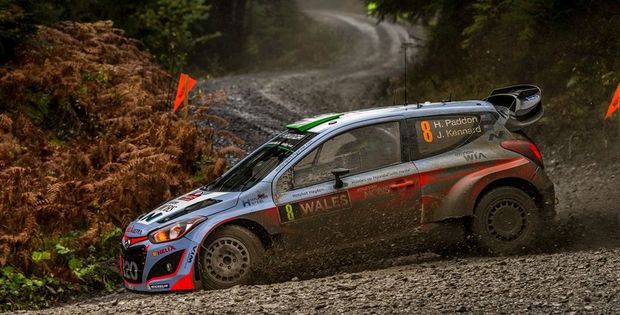 Rain, mud and fog affected conditions as the Hyundai driver Paddon admitted that a set-up change during the mid-leg tyre regroup sent the handling of his New Generation i20 WRC car in the wrong direction.

Rally leader Sebastien Ogier enjoyed the best of the conditions, which worsened with the passage of every car.

Paddon drove the final stage with a puncture, but ended the day fourth in the overall standings after Jari-Matti Latvala's drive-shaft problems dropped him out of third position.

A gap of just 3.8 seconds separates Paddon from team-mate Thierry Neuville in third.

"It's been a difficult day. We expected dry conditions but it's been pretty typical - wet, muddy with a lot of fog so it's been really hard to gauge the grip and read the grip level. We've struggled a little bit, it's not my ideal type of conditions that I like to drive in, but it's a big improvement over where we were here last year," Paddon said.

"We're in a close fight for the podium, about 5 seconds separating three of us for third. We're going to push hard. We've got a lot of stages tomorrow that suit me a lot better and we're going to give it a good shot. We're not here to finish fourth or fifth - we want to give it everything and try and get on the podium."

Tomorrow's second day second leg heads into Wales' Snowdonia Mountains for two loops of stages before returning north to end the day with a short parkland test in England.

Drier conditions are expected in the eight tests, which cover 99.81km and will stretch tyre endurance to the limit.