Hayden Paddon and John Kennard are keeping the pressure on their Hyundai Motorsport team-mates Thierry Neuville and Nicolas Gilsoul after two days of the WRC Rally of Spain. 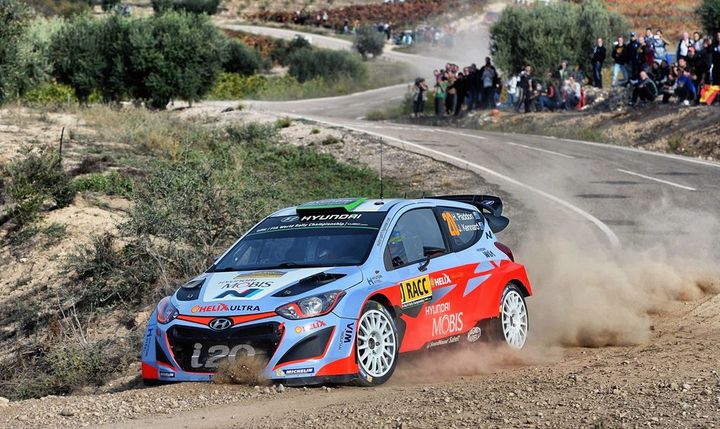 The New Zealanders are now in fourth position, 16.2 seconds behind the Belgians, both crews having benefited from Andreas Mikkelsen crashing out of third place.

During today's eight all asphalt stages, Paddon and Kennard continued to push themselves to improve their pace on this rally surface.

They finished the day on a high, second quickest in the 2.24km super special stage and just 0.1 seconds off Neuville who took the stage win. That result was a big deal for Paddon "…as I have struggled with these stages all my life."

Of the day overall, Paddon said: "It's been a good day on tarmac today. Okay, we struggled a bit for pace in the morning, but were able to make some changes at lunchtime to increase the pace in the afternoon which put some pressure on for the podium.

Now we're in fourth, the gap's about 15-16 seconds to our team-mate Thierry. When you're trying to chase down someone like him on tarmac it's a bit of mountain to climb. But we're close and we certainly won't give up. We'll do some more homework tonight and make some more changes and try and keep the pressure on tomorrow. Still a long way to go."

Hyundai team-mate Dani Sordo holds second after succumbing to the superior pace of three-time world champion Sebastien Ogier, who now has the rally lead with just four stages to run on Sunday of the 11th round of the 2016 FIA World Rally Championship.