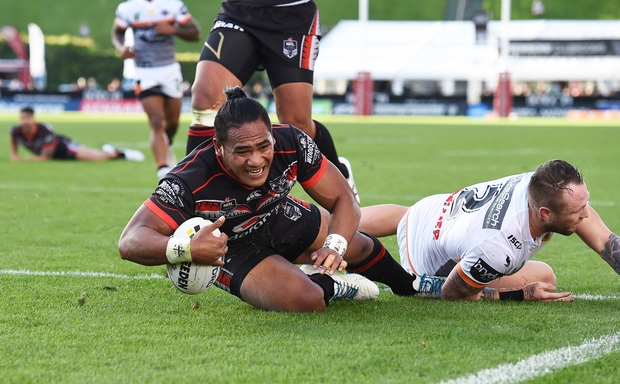 Solomone Kata scores a try for the Warriors. Photo: PHOTOSPORT

The pair have been selected in the starting line-up by new head coach David Kidwell, in a 19-man team that includes seven changes from side that lost 16-0 to the Kangaroos in the Anzac Test in May.

Among those changes is the return of 17-test veteran Jared Waerea-Hargreaves, who last wore the Kiwis jersey at the 2013 World Cup.

Hooker Issac Luke - who is the most-capped player in the side - will play his 37th test for the Kiwis on Saturday after he missed the May Test due to poor form.

Jesse Bromwich captains the team for the second time, supported by two other Melbourne Storm players who featured in the NRL Grand Final, Kevin Proctor and Tohu Harris.

Adding experience in the spine is Thomas Leuluai, who first played for the Kiwis back in 2003.

He will pair up with his Warriors team-mate Shaun Johnson in the halves.