Recalled pace bowler Matt Henry led the New Zealand cricketers fight on the first day of the second Test against India in Kokata. 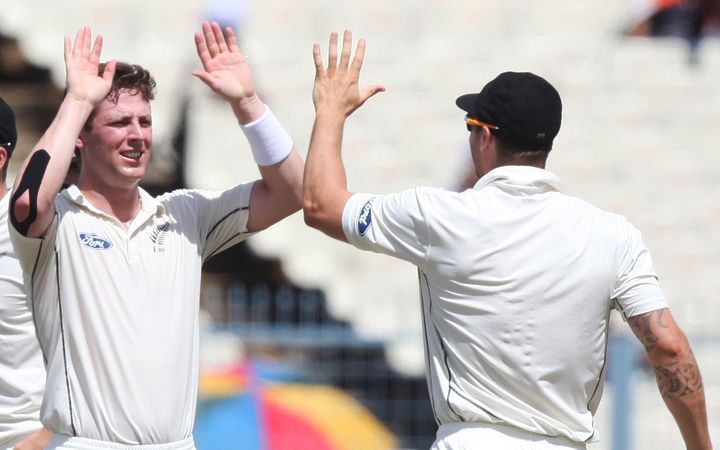 Half centuries from Cheteshwar Pujara and Ajinkya Rahane helped India reach 239 for seven after winning the toss.

The touring side claimed three wickets in the first session and four in the third but the Indian duo forged a 141-run partnership for the fourth wicket to leave the match evenly poised.

Wriddhiman Saha was unbeaten on 14 with Ravindra Jadeja yet to score when bad light stopped play at Kolkata's Eden Gardens.

Henry, who took 3 for 35, celebrated his test return with a two-wicket burst to wreck India's top order and lift the mood in the Black Caps camp.

Beaten comprehensively in the series opener in Kanpur, New Zealand's bid to level the three-test series suffered a body blow when skipper Kane Williamson was ruled out due to illness with Ross Taylor taking over captaincy.

India captain Virat Kohli's decision to bat in his country's 250th home test gave the Kiwi pacemen an opportunity to extract whatever life was available from a green-tinged track and the tourists did not disappoint.

Opener Shikhar Dhawan failed to capitalise on his recall to the side for the injured Lokesh Rahul, chopping a Henry delivery on to his stumps to depart for one.

Henry struck again in his sixth over with a beautiful delivery which angled into Murali Vijay (nine) and seamed away, kissing the shoulder of the bat before nestling in wicketkeeper BJ Watling's gloves.

Henry had just been warned for running on to the pitch and the change of angle worked well for the bowler.

Trent Boult dismissed Kohli for nine to peg the hosts back further but Pujara (87) and Rahane (77) joined forces to halt the slide, both playing with characteristic caution.

Pujara brought up his third successive fifty in the series, while Rahane notched up his ninth test half-century as they batted through the afternoon session.

Neil Wagner broke the partnership when he had Pujara caught at short cover, ending the right-hander's 219-ball vigil which included 17 fours.