A disappointing year for both South Africa and Australia will take a turn for the worse for whichever team finishes on the losing side of their Rugby Championship encounter in Pretoria on Sunday. 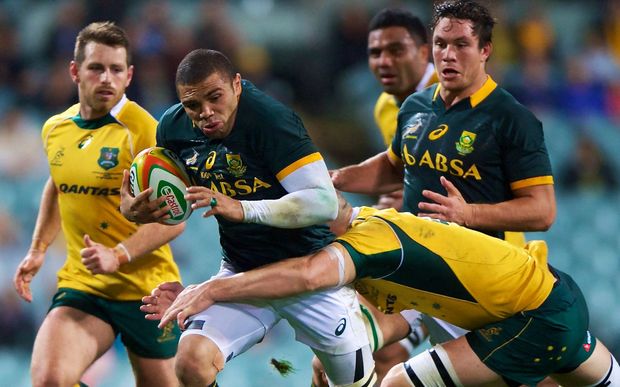 Bryan Habana of the Springboks in action against the Wallabies Photo: PHOTOSPORT

Both countries have looked shadows of the teams that challenged New Zealand for dominance at the Rugby World Cup a year ago, when the Wallabies finished second and Springboks third, and find themselves with crises of confidence ahead of the match.

Australia lost a home series to England in June and have been convincingly beaten by the All Blacks twice, while South Africa has managed just one win in their four Rugby Championship outings this year after a change of coach.

The Springboks' only win was in the first round of the competition and after three consecutive defeats, the South Africans are under intense local pressure and scrutiny heading into the match

It elevates the importance of victory for both on the bone-dry surface at altitude in Pretoria, where Australia have lost all six previous test meetings between the two countries.

With both on the verge of a serious slump, the conviction and confidence that come with a win would be invaluable.

Springboks coach Allister Coetzee has made three changes to his side, recalling Pat Lambie at fullback after three months on the sidelines following his concussion sustained against Ireland in June.

Coetzee said the changes are a part of adjusting the way the team plays on the field.

"The selection of Pat at fullback fits into the way we want to play this weekend, together with his experience, calmness and leadership, which will be invaluable," Coetzee said.

"Elton and Faf remain an integral part of the squad and both are part of our future plans, but Rudy and Morne deserve an opportunity to start."

The Australian coach Michael Cheika has dismissed talk the South Africans are no longer the intimidating opposition they once were.

"It's easy to say that when you haven't played against them ... they're one of the traditional powerhouses of world rugby and that doesn't go away," Cheika said.

"I don't think that the last two games that we have played count for much and I don't think what they've done in the last couple of games counts for much either.

"I'm sure we're going to see the best Springbok team and we've got to bring our game as well. We'll see where we end up."

Sean McMahon will start at 8 for Australia in place of the injured David Pocock in the only change to the Wallaby starting lineup.

McMahon, who is 22 and has 11 caps, has been tipped as long-term replacement in the position for Pocock, who suffered a broken hand in the Wallabies' last international against Argentina.

The Wallabies have won just 10 times from 43 attempts in South Africa and in just three of their last 17 matches.