The New Zealand cricketers have been left struggling on 93 for 4 with one day left to play in the first Test against India in Kanpur. 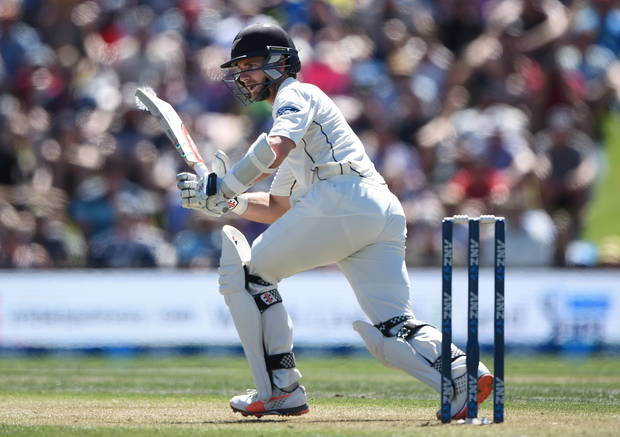 India set New Zealand an improbable 434-run victory target and then blew away the visitors' top order to close in on a resounding win in the first Test.

India resumed on day four on 159 for 1 and after two sessions of positive batting made a further 218 runs before captain Virat Kohli declared on 377 for 5.

Needing to pull off the biggest successful chase in the history of Test cricket for an unlikely win, New Zealand got their chase off to a terrible start, losing two wickets in just the fourth over.

Ravichandran Ashwin, who dismissed four frontline Kiwi batsmen in the first innings, proved once again why he is considered India's premier spinner.

The off-spinner had Martin Guptill caught at silly point for a duck with the first ball of his second over and trapped Tom Latham leg before wicket with the fifth, sending him off the park with just two runs to his name.

In the 18th over, Ashwin claimed his 200th test wicket when he dismissed New Zealand skipper Kane Williamson leg before.

Ross Taylor then ran himself out to compound the tourists' misery.

Luke Ronchi (38) and Mitchell Santner (eight) will return on Monday hoping to resist India's victory march in the first match of the three-Test series.

"The game's not over yet," Ashwin said after becoming the second fastest bowler to take 200 wickets, achieving the feat in his 37th test.

"We should have got them five or six down today itself. I'm bit disappointed," Ashwin added.

Earlier in the morning, Williamson attacked with spin from both ends and his slow bowlers did not let him down.

Kohli fell to off-spinner Mark Craig and Ish Sodhi struck the next blow with a beauty of a delivery that spun from outside leg, took the outside edge of Pujara's bat and nestled into Taylor's waiting hands at slip.

Ajinkya Rahane missed his 50 - caught off Santner's bowling for 40 - but Rohit Sharma and Ravindra Jadeja smashed unbeaten half-centuries and featured in an unbroken century stand to virtually bat New Zealand out of the contest.

Sharma, who made 35 in the first innings, remained unbeaten on 68.

Jadeja, who scored 42 not out in the first innings and claimed five wickets with his left-arm spin, continued to have a good match.

The left-hander clobbered three sixes en route to his second Test fifty before breaking into a bat-twirling celebration.