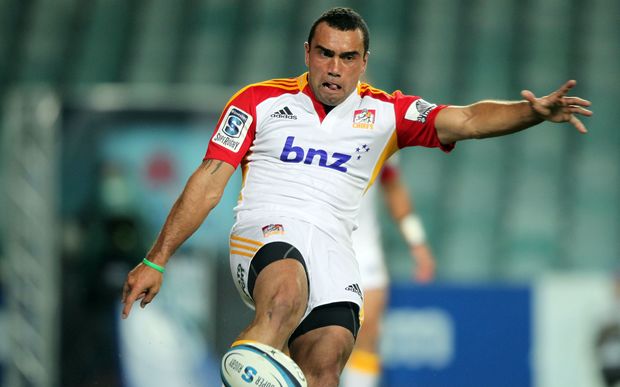 Charlie Ngatai is all concentration as he kicks for the Chiefs Photo: Photosport

Ngatai will be sideline for the remainder of the 2016 Mitre 10 Cup as he continues to recover from concussion.

The midfielder and Taranaki co-captain continues to make positive progress following the concussion he sustained during the Super Rugby competition in May, and has been participating in moderated training with his Taranaki Bulls teammates.

However, while he is still unable to resume full contact training, Ngatai has made the decision in consultation with Taranaki and New Zealand Rugby medical personnel, to put aside his Mitre 10 Cup aspirations and focus his energies on making a return to rugby in 2017.

"While I appreciate it's been frustrating for Charlie not being able to play for us this season you would never know it, as he has continued to immerse himself fully in our environment and give as much as he can to help his teammates.

"Charlie is a highly intelligent and determined rugby player who has a massive future ahead of him, with the All Blacks, Maori All Blacks, New Zealand Lions Series, Super Rugby and Mitre 10 Cup to look forward to in 2017 alone. We wish him all the best for his ongoing recovery and will continue to support him as he works towards taking the field again in the near future" said Cooper.

Ngatai added: "Although it has been frustrating not to be out there with the boys this season, I know the best thing for my recovery is to take the time to make sure I am 100 percent right so that I can look forward to many more years on the rugby field. I'm grateful for all the support I've received from the Port Taranaki Bulls management, players and the Union and I wish the Naki boys all the best for the rest of the season. I can't wait to get back out there next year."