Jordie Barrett has signed a two-year deal to play for Hurricanes and will join his brother Beauden in Wellington for the 2017 and 2018 Investec Super Rugby seasons. 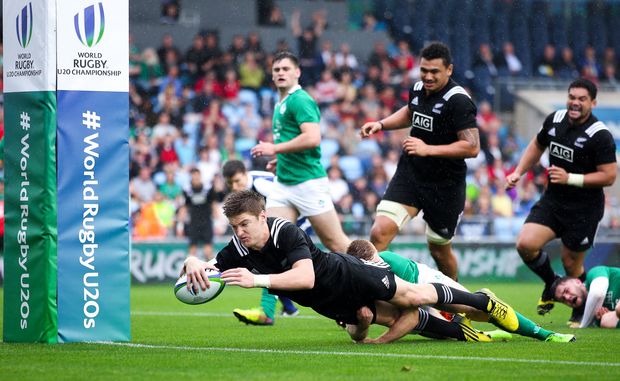 The 19-year-old will become the third member of the Barrett family to play for the Hurricanes after his father Kevin and older brother.

Barrett said he was excited at the opportunity to become a full-time professional rugby player and to make a contribution to the Hurricanes.

"It was a big decision for me to commit to rugby full time as I have really enjoyed playing cricket the last couple of years and in particular the playing opportunities I was given through both Taranaki and Central Districts Cricket.

"I just felt that signing with the Hurricanes was the right decision for me. It has been a goal of mine to play Super Rugby and to be able to train and play alongside Beauden at the Hurricanes will enable me to continue to develop as a player."

"Jordie's an exciting young player with undoubted talent and a real drive to succeed and we believe the Hurricanes is the right environment for him to develop his talent.

"Like all young players starting out he still has room for development and with the right coaching structures around him at the Hurricanes I'm sure we will see him realise his full potential in the years to come.

"He's a very versatile player who is capable of playing second-five, fullback and also at first five, so he really adds some value to our squad in that respect and I'm sure he's going to make a really positive contribution."

Barrett said settling on the first big move of his professional career had been a tough decision, particularly with another brother, Scott , at the Crusaders.

"I had approaches from both the Crusaders and Hurricanes and it was a very difficult decision as I've really enjoyed my rugby this year and the Canterbury playing environment has been fantastic.

"It is good to have my immediate playing future sorted as I can just focus on playing well during the remainder of the Mitre 10 Cup."

Barrett was a member of the New Zealand Under 20s team at the 2016 World Rugby Under 20 Championships in England and will again be available for the national age grade squad in 2017.