There was relief all round for Michael Cheika and his Wallabies after they secured their first win in seven test matches with a sometimes nervous victory over South Africa in Brisbane. 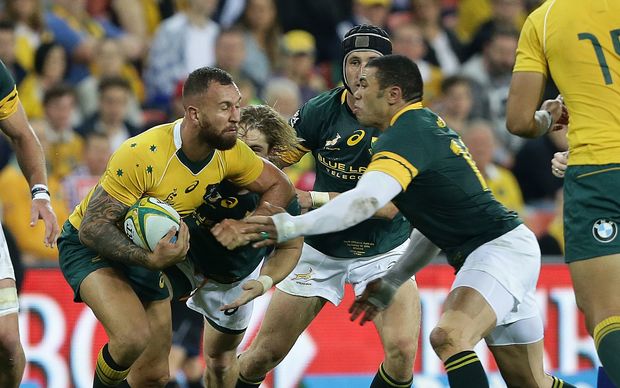 Quade Cooper in action against the Springboks 2016. Photo: PHOTOSPORT

The achievement of reaching last year's World Cup final had been all but forgotten in a barrage of criticism over the last few weeks after a 3-0 June series loss to England was followed by back-to-back defeats by the All Blacks.

A seventh straight defeat would have matched Australia's worst run in the professional era and heaped even more pressure on Cheika and his players.

The 23-17 victory is unlikely to help much in their already ill-fated defence of the Rugby Championship title but a first win of the year could do wonders for the confidence of the team as they head to Perth to play Argentina next weekend.

"To give our fans a win at home for the first time at this season, we're really pleased with that," Cheika said in a pitchside interview.

"Something to build on, it's going to be a tough match against the Argies next week."

As well as a first victory of 2016 for the Wallabies, it was a first win in the gold shirt for a string of Australians, including try-scoring lock Adam Coleman, impressive winger Reece Hodge, centre Samu Kerevi and prop Allan Ala'alatoa.

"I suppose it's a bit of thing for us," added Cheika. "We're trying to get as seamless a change as possible with young players coming in. Guys with single digit test matches, there's probably half a dozen of them.

"They've been looking for a win because they haven't had the chance to sing the (victory) song yet but they're standing up more and more with every match."

Cheika was also impressed with the more experienced playmaking axis of scrumhalf Will Genia, flyhalf Quade Cooper as well as inside centre Bernard Foley, who scored a try and kicked 13 points.

Cooper said he had enjoyed the match all the more for the fact that it had been so tight and thought Australia would improve in attack and convert more chances as the season went on.

"Because the game was in the balance and we have been in those positions all that much, we probably second guessed it a bit," Cooper said.

"But that will come the more we play with each other and to win in big moments like that tonight gives us confidence."

A solid scrum, much improved lineout and a dogged defensive effort were also promising signs as far as loose forward Michael Hooper was concerned.

"It feels good, little bit of a monkey off the back," the former captain said.

"I was so proud of the guys tonight playing until the last minute ... really happy with the win and the work-rate of the players."