The Black Caps first cricket test against South Africa in Durban ended in farcical fashion with the outfield at Kingsmead proving an embarrassment for the hosts. 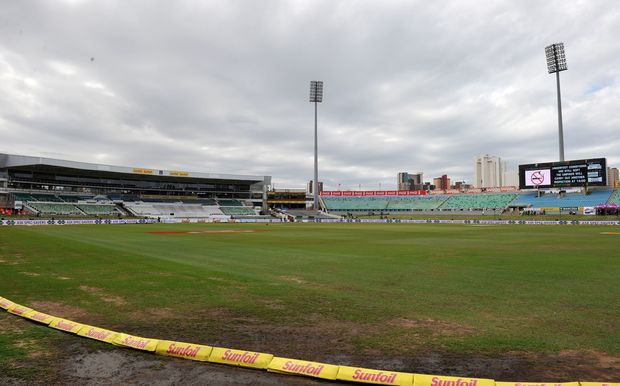 The first cricket Test between South Africa and New Zealand has ended in a draw at Kingsmead due to wet conditions. Photo: PHOTOSPORT

The match ended in a draw after more than three days play was lost due to a wet outfield.

Heavy rain on Sunday morning left the Kingsmead outfield patchy, muddy and dangerous and despite three days of fine weather there's been no improvement.

The test was drawn after no play was possible on today's final day.

New Zealand finished on 15 for two in reply to South Africa's first innings of 263.

Black Caps coach Mike Hesson said despite playing for less than two days, they've taken some lessons from the match.

"From a batting point of view we were challenged... in some tricky conditions and that's going to be good for us moving forward," he said.

"From a bowling point of view we learnt a lot regarding our lengths when it swings, maybe just adjusting our seam presentation a little bit - just some of the little subtleties that I think we can look to introduce and evolve our game.

"We've got seamers that are ranked very highly you know, worldwide and as long as conditions offer something we're going to create some challenges so we hope to do that in Pretoria."

Hesson said the series finale in Pretoria now becomes that much more interesting.

"I think everybody's frustrated what's happened over the last few days but it does set up an exciting contest at Centurion... a ground that we obviously had some experience with last year, so we know a little bit about it.

"And you know, a one off test - it's exciting and I know the guys in the changing room are excited."

The second and final test starts in Pretoria on Saturday.