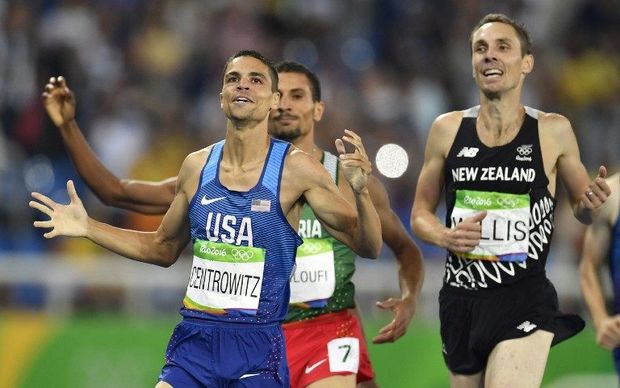 Nick Willis crosses the line in third place in the men's 1500 metre final at the Rio Olympics, behind gold winner Matt Centrowitz of the USA. Photo: AFP

In his fourth Olympics the New Zealand runner won bronze in the men's 1500 metre final.

Willis ran a time of 3:50:24 minutes in the final, 0.24 seconds behind the winner Matthew Centrowitz of the United States.

It was a shock victory for Centrowitz, who stunned pre-race favourite Asbel Kiprop of Kenya.

Willis ran in the middle of the pack for much of the race, edging into the top three a couple of times during the event, and was in seventh place with one lap to go.

But the 33-year-old kept up with the leaders as the pace increased for the final lap, and sprinted well down the straight to claim bronze 0.05 seconds ahead of fourth placed Ayanleh Souleiman from Djibouti.

It is his second Olympic medal, after he won silver at the 2008 Beijing Games.

"It doesn't have that same sort of europhic joy that I experienced, and I broke into tears but it's just this personal satisfaction that we corrected all of the wrongs from the London experience and just really refined the artform of the 1500 metres this year and came away with a great result."

Willis said no one expected the race, won in a time of 24 seconds outside world record pace, would be run so slowly.

But he said he was prepared for any scenario in Rio and said it was important that he was aggressive from the outset.

"I was engaged and I was involved in the front of the race as opposed to sort of biding my time at the back and had I done that I would have been way out of the medals and out of luck so very thankful."

"I don't know what got hold of me I wasn't planning to run up on the shoulder of the leader for the first two laps but that really got me engaged and I came away with a better result because of it."

Willis said he did not focus much on his competitors, a mistake he made four years ago in London.

"We thought 'this is about yourself' be the best Nick Willis that I can be. Don't be distracted by what else is going on, turn off social media. Stop worrying about the times my competitors are doing in races. So long as you're ready, whether you finish first, or whether you finish 12th, you'll be satisfied at the end of the race."

Willis said he would love to give longer distance events a go.

"So long as I can break 50 seconds for the 400 in training then I'll stick with the 1500 metres but regardless, one day my speed is going to slow down and I'd love to give the 5k and even the marathon a go sometime.

"Definitely got two or three years of endurance racing ahead of me and so hopefully I can still do the 1500 metres for a year or two as well before that".

He claimed both titles in 2012 and is only the second man in history to defend the titles of both distances.

Farah took the gold in a time of 13 minutes and 3-point-30 seconds, a full second ahead of Ethiopean Hagos Gebrhiwet who won silver.