Play was abandoned without a ball being bowled on the third day of the first cricket test between South Africa and New Zealand because of a wet outfield. 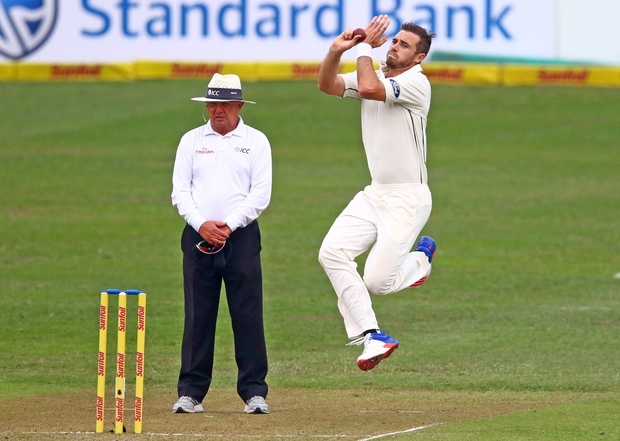 Bowler Tim Southee on the attack for the Black Caps Photo: Photosport

Rain on Saturday had curtailed play from just before the end of the first session with New Zealand struggling on 15 for two in reply to their hosts' first innings score of 263.

Dale Steyn, who has only just returned to the South Africa test side from injury, dismissed both openers within the first nine overs.

Steyn was not only threatening but miserly too, conceding just three runs from his six overs.

Seamer Vernon Philander also made an impressive return to test cricket after 10 months on the sidelines through injury and was unlucky not to get the wicket of Latham when Dean Elgar dropped a simple chance in the slips.

The Black Caps captain Kane Williamson was at the crease with Ross Taylor when play was called off due to rain.

Earlier in the day, the Black Caps dismissed South Africa for 263.

The hosts began day two on 236 for 8, and were held up by a career-best unbeaten 32 from young fast bowler Kagiso Rabada, who looked composed before running out of partners.

Tim Southee bowled Dale Steyn for 2, before Trent Boult picked up the last wicket of Dane Piedt, who was caught behind for 9.

Williamson and Taylor will both resume batting on day three with two runs apiece.