Rio 2016 Olympics - Sailing has been called off for the day in Rio due to a lack of wind meaning the 470 women's crew of Jo Aleh and Polly Powrie will have to wait until tomorrow to try and claim a silver medal. 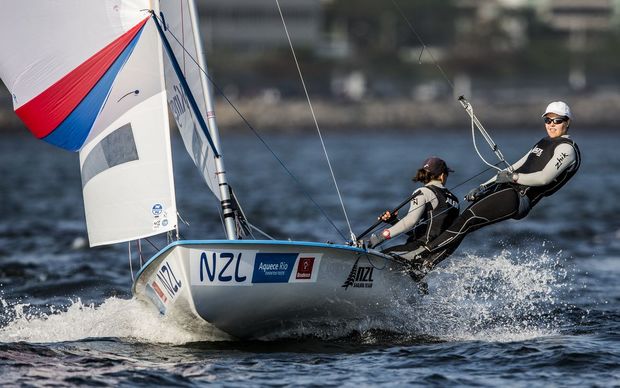 The defending Olympic champions are second going into the final medal race but are too far behind the leaders Great Britain to bid for gold and have just a narrow one point lead over the third placed United States.

The Great British crew need only to finish the medal race to seal gold.

If sailing is again postponed tomorrow the medals will be decided on current standings.

The New Zealand men's crew of Paul Snow-Hansen and Daniel Willcox are ninth, their medal race has also been postponed to tomorrow.

Meanwhile the women's 49erFX crew of Alex Maloney and Molly Meech are also due to contest their medal race tomorrow.

They currently sit fourth but are just one point off the lead which is jointly held by Spain, Brazil and Denmark.

The men's 49er crew of Blair Tuke and Peter Burling have their medal race tomorrow also, though they've already wrapped up gold with an unassailable lead.