The New Zealand men's hockey team have missed out on an Olympic semifinal after blowing a 2-nil lead to lose 3-2 to Germany. 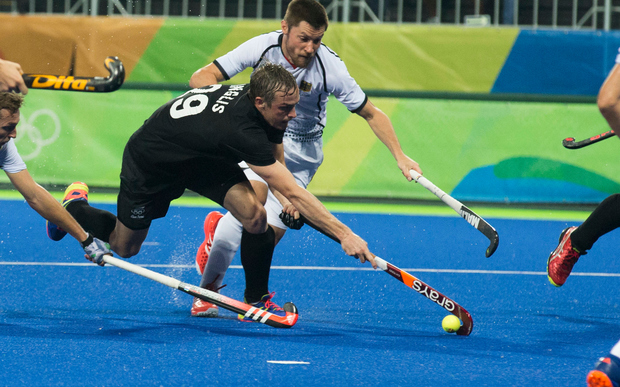 New Zealand's Hugo Inglis in action against Germany in the quarterfinal in Rio Photo: PHOTOSPORT

The Black Sticks scored first through Hugo Inglis to take a 1-nil half-time lead, and extended that advantage to 2-nil in the third quarter on the back of a goal by Shae McAleese.

New Zealand looked on track for a famous victory but Germany got their act together in the dying minutes.

Germany scored their first goal with four and half minutes remaining then went on to equalise with just 48 seconds left on the clock.

The Black Sticks seemed to be caught ruing letting their two-goal lead slip as Germany pounced on the shell-shocked New Zealanders to score a third goal and steal the win with just a second and a half remaining.

It would have been a huge upset for the seventh-ranked New Zealanders over the third-ranked Germans, and they will be kicking themselves after letting a genuine chance of moving to within one win of a guaranteed medal slip away.

Germany will now face Argentina in the semifinals, while Belgium and the Netherlands will meet in the other match.