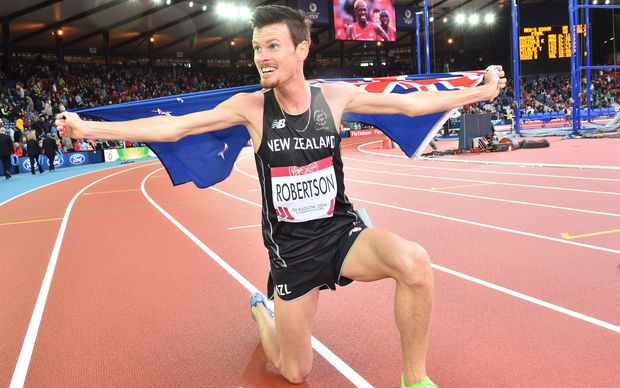 Robertson ran one of the races of his life, crossing in 27:33.67 to carve eight seconds off Dick Quax's 39-year-old New Zealand national record.

Mo Farah was brilliant repeating his win from the London Olympics after a fall early in the race, outkicking Kenya's Paul Tanui to win in 27:05.17.

Robertson, the bronze medallist in the 5000m at the Glasgow Commonwealth Games, cut 13 seconds off his previous best set in Oregon in May last year.

The 26-year-old who had come off training at altitude in Switzerland said that he kept to his pre-race plan throughout the race.

Robertson told Sky Sport he was incredibly happy with his result.

"Tonight it was all about the national record," he said.

"I just tried my best to run to my race plan and I knew that if keep running hard enough, I'll catch back up to he group after I drop from the surges.

"I'm just really happy that I achieved something, I come away from this with my goal achieved."

Robertson said that he wasn't fazed racing against Mo Farah.

"I've raced with him before, I don't care about names or who's who I just go out there and do my thing and I try to beat everyone."

Dick Quax said he was pleased for Robertson to get his record.

"It's time it went, he ran a fine race, coming home faster over the second 5000m, I'm delighted for him. It was a great race to watch," said Quax. "I'm now just the second fastest 10,000m runner from Hamilton Boy's High School behind Zane"

The New Zealand women's hockey team have ended their pool play on a high, beating China 3-0 to finish second in Pool A.

The Black Sticks never looked troubled by the Chinese, taking a 1-0 lead into half-time after Olivia Merry found the back of the net in the 21st minute.

The New Zealanders scored twice in the third quarter with goals to Gemma Flynn and Anita McLaren to put the match beyond doubt.

They will play Australia in their quarter-final on Tuesday (NZ time).

Golfers Danny Lee and Ryan Fox have fallen down the leaderboard during the third round of the men's tournament in Rio.

Lee started the day tied for sixth, but he dropped 27 places after a five over par 76 to be even for the tournament.

He's currently 12 shots off leader Justin Rose of Great Britain, while Fox is even further away sitting at four over par.