Rio 2016 Olympics - With Rio about to take the world stage with its Olympic opening ceremony in just a few hours' time, protesters against the government of Michel Temer are making the most of the glare of the international media to state their case. 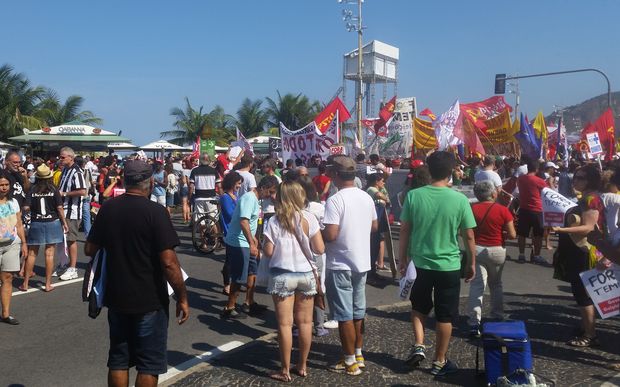 Protesters gather in Rio de Janeiro ahead of the opening of the 2016 Olympics. Photo: RNZ / Gael Woods

The political unrest in Brazil, which came to a head with the impeachment of the president Dilma Rousseff in May, is still playing out on the streets of Rio.

Thousands gathered at world famous Copacabana beach today and while the protesters had a serious message, it was a peaceful and good natured, even musical, affair with Rio de Janierians of all ages railing against "the Brazilian coup".

A hefty consignment of police was on duty, but whether to keep an eye on the protesters or ensure the passageway of motorcades of VIPs travelling to and from this particularly expensive piece of real estate wasn't clear.

Either way, the protesters were getting on with what they called a protest for democracy.

"Temer out" was the overwhelming message, with plenty of English translations available.

"And not just us," said Jochim. "Fifty-four million Brazilians voted for her."

They said the government was not working for the people but for corporate interests. 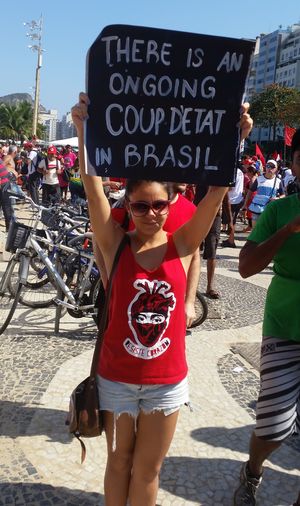 Maria was among those protesting against the government. Photo: RNZ / Gael Woods

He and Maria, who both work in the theatre in Rio, were not enthusiastic about the Olympics taking place in the city.

"They have put a lot of money into this big event. They could have done a lot more with this money.

"For example, they put in just one subway, which was chosen for the Olympic games. They spent 10 billion Real (just under five billion NZ dollars) - that could have improved sanitation all over the state," Maria said.

She said it was important to be at the protest.

"We need to be here to show people from the other countries which are here what is going on in Brazil right now.

"Today, tonight at the ceremony Michel Temer will be there. He is not our president. Dilma Rouseff is our president. I voted for her. I did not vote for him."

"For the last 13 years, for the first time, we have had a left wing government. It's not perfect, I am a critic of many things. There is still a lot of problems, but there has been progress in the country."

The opening ceremony is scheduled to get under way just before 11am today.