Rio 2016 Olympics - The New Zealand women's football team have been beaten 2-0 by defending champions the United States in their opening match at the Rio Olympics. 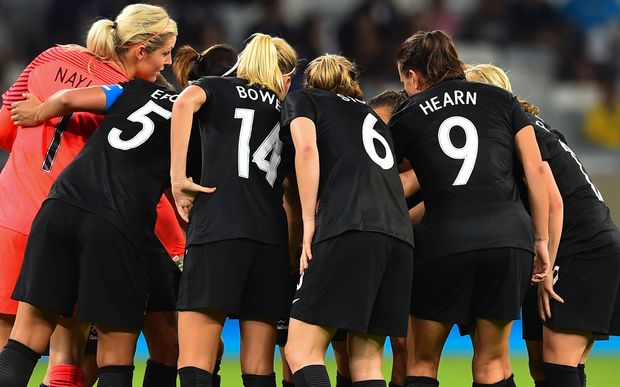 The New Zealand Football Ferns team vs the USA at the Rio Olympics. 2016. Photo: PHOTOSPORT

The Football Ferns conceded a goal in each half to the gold medal favourite Americans in Belo Horizonte.

Captain Carli Lloyd and Alex Morgan were the goalscorers for the US.

After the game, Ferns captain Abby Erceg said her teammates must not take the loss to heart.

"Obviously, we're a little bit disappointed because we wanted to at least get something from the game," she said.

"But you're playing the world champions and you can't take a result like that too personally. It was a hard loss and you do want to get as much as you can from the game but they're number one for a reason and they'll punish you if you make a couple of mistakes."

New Zealand competed well with the World Cup champions for 90 minutes, despite being ranked 17 places lower and operating on a budget more than 95 percent smaller.

Erceg said the side would need to increase its firepower to stand a better chance of progressing out of the group.

"We didn't threaten them too much and that's something we'll have to look at heading into the Colombia match," she said.

The Ferns' coach, Tony Readings, said he was proud of the team's effort.

"We are disappointed but there are lots of positives to take from the game. We were really hard to break down. We didn't cause them too many problems at the back but not many teams do," he said.

"We do need to focus on our next game which will be a totally different test. I am proud of the way the players performed."

The next game against the 24th ranked Colombians takes place on Sunday morning at 11am.

Canada were beaten 2-0 in their opening game of the London Olympics four years ago and went onto secure the bronze medal.